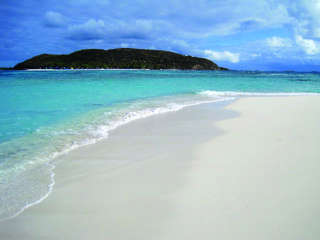 I’m about to blow it by spreading the word, but I just spent a week sailing in the Caribbean in steady trade winds and in crystal clear waters, mooring off pristine beaches, drinking local rum, and sampling local fish. And I didn’t even need a passport. This is the reality of a sailing charter vacation in what are billed the “Spanish Virgin Islands” (SVI), the small, sparsely inhabited islands off the eastern tip of Puerto Rico.

Until 2003, the U.S. Navy had been using Vieques—the largest of the SVI—as a bombing range and munitions test site. And until the last couple of years, those few cognoscenti who wanted to sail the SVI had to talk a charter company in neighboring St. Thomas into letting them take one of their boats over (and then face an upwind, up-current slog of 25 miles to bring it back). Now with the bombing ended and with a charter company based in Fajardo on the east end of Puerto Rico, these amazing cruising grounds are slowly opening up to charter sailors and not just the fortunate Puerto Ricans who have made these islands their weekend playground for years.

I have wanted to sail the SVI for some time, but had been reluctant to do so until Sail Caribe (sailcaribe.com) opened for business. Their fleet of Hunter monohulls and Lagoon catamarans is located at Puerto del Rey Marina, a location that makes hopping to the islands easy. The nearest—tiny Isla Palominos and Isla Palominitos—are visible from the base. My crew had chartered a Lagoon 400 catamaran, fitted out with luxuries that I’d not heretofore enjoyed on charter boats, including a chart plotter, a generator to run the air-conditioning (wholly unnecessary, due to having perfect weather), electric heads, and a refrigerator and freezer that kept our provisions in top shape for the entire week.

Getting to Fajardo is a straightforward exercise. With non-stop and one-stop flights arriving in San Juan from Baltimore and Washington, DC, by mid-day, it’s not much more than an hour drive from San Juan to Fajardo. Sail Caribe will assist with transport, or you can do as I did and rent a car to use for provisioning and errands. (Be aware that a little Spanish helps if you’re going to attempt the drive; all of the road signs in Puerto Rico are in Spanish only.) A night-before sleep-aboard is available on your boat, but we elected to stay at the nearby El Conquistador Resort. 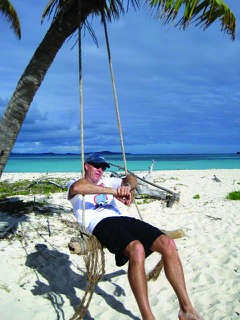 While half of my crew of four stayed behind for boat and chart briefings, the rest of us went to the Amigo market to provision. Though short on some items—seems I got the last packages of Wheat Thins and craisins in Fajardo, but there was not an avocado to be found—this supermarket has most basics, including the ever-important beer (the local Medalla is quite good), wine and rum (mostly Bacardi, Barrillito, and other Puerto Rican brands). For those with more specific needs or a willingness to travel a bit further, Walmart and Costco have outlets within range and might offer a slightly better selection. Prices are noticeably higher than in Maryland, but that is the cost of paradise.

Once off the docks, it doesn’t take very long to reach the islands. With steady east and east-northeast tradewinds in the 10- to 20-knot range in the winter, the first legs will be upwind; some sailors opt to make the longest trip first, going all the way to the east end of Vieques or to Culebrita, while others do as we did and take a series of short hops. We spent our first night moored off Isla Palominos, then hopscotched from there to uninhabited Cayo Luis Peña, to the outside of the town of Dewey on Culebra, on to uninhabited Culebrita, and then to three different anchorages on the south side of Vieques before returning to Fajardo.

Much of the uninhabited islands, as well as parts of Culebra and Vieques, are wildlife or nature preserves. Thus, except for the small towns, much of the beachfront in the SVI is undeveloped and in some cases, not even reachable except by boat and/or four-wheel-drive vehicle. In the interest of protecting the sea bottom, free mooring balls have been installed in virtually every anchorage, and unlike more popular cruising grounds, there is no race to snag them, because they are plentiful compared to the small demand for them.

As beautiful as the beaches are, it seems a miracle that they are largely free of development and visitors, though the obscurity of the cruising ground and the difficulty that land-based travelers would have in reaching them explain some of that. For example, when we arrived at lunchtime to the beach at Bahia Tortuga on the tiny island of Culebrita, we were only one of three catamarans occupying the spacious crystal-blue bay bounded by sugary sand. Though Bahia Tortuga is in the sight of St. Thomas in the distance and offers stiff competition against the nicest beach in any of the British or U.S. Virgin Islands, the only real company one will have here is the sea turtles that nest on the beach and swim in the bay.

Bahia Tortuga is but one of dozens of stunning strands that edge these pretty islands. As a committed beach-o-phile, I couldn’t imagine bombing them as the Navy did. To this day, many of the beaches on Vieques still bear the prosaic monikers the Navy gave them, but ho-hum names like “Blue Beach” are giving way to their more lyrical Spanish counterparts, like “Bahia de la Chiva.” With the exception of a few of the more famous beaches, such as Culebra’s Playa Flamenco, which offers chairs for rent, food kiosks, showers and toilets, there are no facilities at the beaches, and much to my chagrin (and my only real complaint about the SVI), there are no beach bars to be found.

For social activity, as well as shops for minor re-provisioning and restaurants, you have to visit one of the towns. One of our stops included Dewey on the island of Culebra, and another was a day spent in Esperanza on the south side of Vieques. (There is also a town on the north side of Vieques, Isabel Segunda, which we didn’t visit.) Dewey, embracing the large and protected harbor of Ensenada Honda, appears to attract cruising sailors and seems to have some marine services. Esperanza has a pretty waterfront malecon bordered with funky bars, shops, and restaurants, including the justly lauded El Quenepo, which would be at home in any major city in terms of quality, but features island style and ease.

If the topography of the islands and the pleasure of sailing there hearken back to the British Virgin Islands (BVI), it is the BVI of decades ago, before the “credit card sailors” descended en masse and with a decidedly Latin twist. If stepping back into the past was one of the themes of our journey, we fittingly concluded it with wanderings over the ancient blue cobblestones of Old San Juan and among the pastel and wrought-iron old buildings of one the oldest settlements in the Americas before jetting back to reality.

Let’s keep this secret amongst ourselves, shall we?

This article first appeared in the May 2011 SpinSheet.

BACK TO MAIN CHARTER PAGE