Beyond the Stereotypes Charter Sailing Vacations in the British Virgin Islands 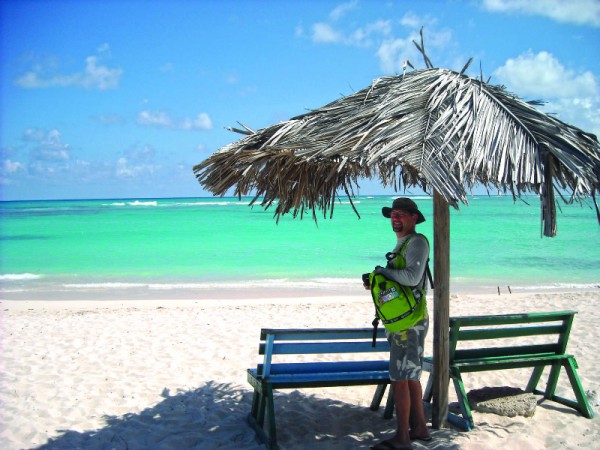 After three decades of sailing and 10 years of writing about it, it was a little embarrassing to admit that I was a Virgin Islands virgin… until last month. As we landed on Beef Island in the British Virgin Islands (BVI) to charter a 40-foot Dufour through Dream Yacht Charter, my head was stuffed with stereotypes from years of reading and editing sailing charter vacation stories. A part of me felt jaded, as if I’d been there, done that, and was too cool in advance to lug home a Willy T shirt. Then, we landed. I walked into the tropical air to a new land that both fed and modified the pre-packaged, glossy images in my head.

The Fab Four. Good luck finding a BVI charter company website that doesn’t mention the top four stock images of sailing in the Caribbean: palm-fringed white sandy beaches, steady trade winds, line-of-sight navigation, and crystal blue waters. What struck me as I experienced the fab four was how much more spectacular the visceral experiences were than the brochure descriptions.

All of the beaches we saw were as breathtaking as the marketing material photos, but if I had to beam myself back to one, I would choose the beach in front of the remote Cow Wreck Beach Bar and Resort, a tiny cluster of villas and watering hole on Anegada, which was only ahead of my second favorite, the nearby Loblolly Beach, for one reason: conch shells. Not only are the resort’s pathways and gardens lined with conch shells, but also, every swimmer who steps on something and investigates it pulls up beautiful white coral chunks and full-sized pink conch shells. Upon seeing a picture of that amazing beach, my niece commented, “That is my dream land.” It’s everyone’s dream land. 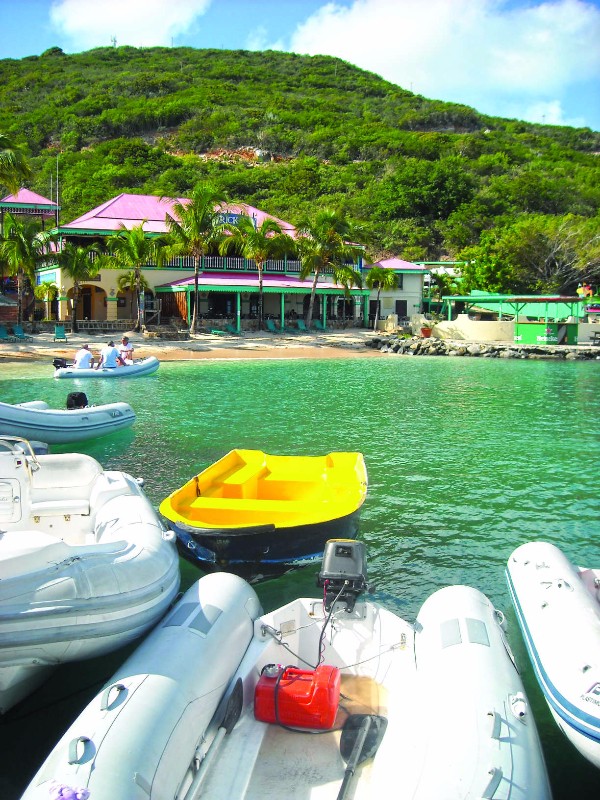 Speaking of fantasies, find me a Chesapeake sailor who doesn’t pine for steady breeze and line-of-sight navigation. Our average breeze for the week was lighter than the typical daily 15-20 knots I’ve read about; apparently that trend starts in December and persists through summer. We did not complain about our weeklong, steady eight-15 knots. Several one-tack-only sailing days made for true relaxation.

Intellectually, I knew what line-of-sight meant, but the freeing feeling of being able to pick a point and sail straight for it without bracing for the ol’ mud bump was surreal for me, as it would be for any Chesapeake sailor trained to keep a maniacal look-out for shoal and channel marks. When a friend told us he had navigated his entire trip with a placemat he had bought at the airport, I only fully grasped the truth in it when we did the same. (But don’t forget your binoculars; they make for good anchorage spying and turtle spotting if nothing else).

Island Time. I took the famed “island time” stereotype to mean more than “vacation slow time,” namely lousy, slow service; that was slightly inaccurate. We were blessed with terrific, even timely, service almost everywhere we went—although sometimes, it proved challenging to find someone who would take our cash.

Our trip started after a white knuckler van ride up, down, and all around to a funky little nine-room hotel nestled in the lush green hills above Josiah’s Bay, Tortola, called the Tamarind Club. The bearded bartender named Clint, whose mom owns the place and sister Katie also works there, gave us complimentary Dark n’ Stormies upon our arrival and let us know there was bug spray behind the bar if we needed it. Bug spray? (See “Surprises.”) We were in room five, and when it came to our key… well, they didn’t really do keys there. When we took off the next day, we owed them for two Red Stripes. The bartender waved us away and said, “Catch you next week.” 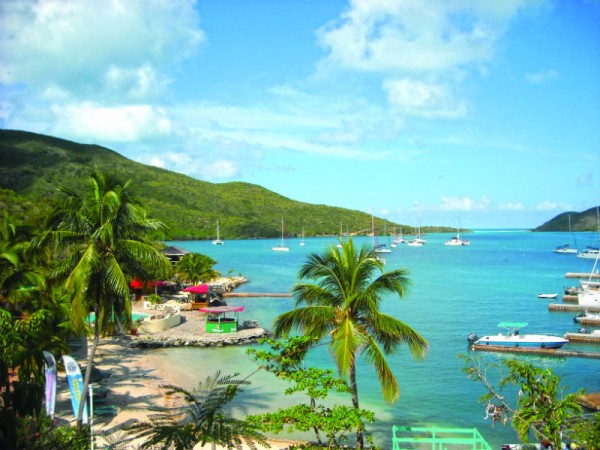 Our first real glimpse of island time came when our cab driver Ronald, who became “our guy” when we needed rides, dropped us at the grocery store and said he would return in 30 minutes. It was a long enough 30 for me to want to hug him upon his arrival, which staved off the skipper’s impending apoplectic attack. Once we arrived at Hodges Creek Marina, when asked what we owed him, Ronald shrugged and said, “Whatever feels right.” I gave him $10 more than the hyperventilating skipper would have.

The crew at Dream Yacht Charter in Maya Cove seemed too busy for island time. The docks were bustling with people cleaning boats, fueling, docking, provisioning, dealing with German clients with lost luggage, and briefing sailors on charts. The manager, Yann Leboyer, and customer service representative, Jana Barry, efficiently walked us through the paperwork and the systems on our clean, new-looking boat. Upon learning that we lacked charcoal for the grill, an inverter for charging phones, and an iPod wire, they lent us all we needed, including snorkel masks and fins, and even threw off our lines for us as we traveled, carefully, through the well-marked reef-side channel into the true-to-its-reputation crystal blue yonder.

Surprises. Waking up our first morning at Great Harbour on Peter Island to a dozen pelicans dive-bombing for fish along the rocks and entertaining us as we ate a leisurely breakfast. On that first day, jumping into the water, stunningly blue and salty, donning my snorkel mask, and noting that the rocks near our mooring—not a “famous” snorkel spot, just some rocks—were teeming with colorful tropical fish. And then, the delight of watching a sea turtle gently swim by. Every turtle who swam by underwater or popped his head above the surface as if to say “hi,” was a wonder.

The two men dancing with their shorts around their ankles on deck of a big catamaran circling the Willy T Floating Bar and Restaurant were also surprising, but of the “wish I had a mind eraser” variety. Other unexpected details: how tricky it was to locate Advil, Benedryl, sunblock, and eek—ice! Our motto: bring it or buy it as soon as you see it. Don’t assume you’ll have other chances at your next anchorage. The BVI are not “convenient” as we know convenient; sparsely stocked “markets” may test your sense of humor.

Bugs. After three locals at separate places told us that the bugs don’t bite, even as sailors around them slapped mosquitos and no-see-ums on their necks and legs at sunset, my partner said, “Maybe the bugs don’t bite the locals.” Note that we were there pre-season and in lighter air, so maybe the situation improves in the windier winter. My advice? Learn to love bug spray.

One surprise was how Hurricane Sandy’s storm surge arrived later than we expected. We were naïve enough to think that we’d passed Sandy as she swirled toward the northeast and we headed for San Juan, PR. Four days later, 10-foot swells arrived. When we turned out of the channel protected from the weather by Tortola to head toward Virgin Gorda’s North Sound, we realized that our charter company manager’s warning about storm swells was spot on. Surfers on the west and north sides of Tortola had been rocking it for two days.

Along with the swells came rip tides along the shore, crashing waves at popular snorkel spots we had to avoid, such as the Baths, the Norman Island Caves, and the Dogs, and a few humbling lessons on currents to remind us that we weren’t in Annapolis anymore. We ate sandwiches while safely moored and watched a few crazies struggle in the surf to swim up to the beach at the Baths (with a red flag flying), while getting absolutely pounded by waves near the rocks. We feared for their noggins on the rocks (they did make it safely back to their big catamaran with puny brains intact). My advice to new charter sailors would be to listen to your charter manager’s weather briefing closely. When in doubt, play it safe, or at the very least, call the charter company’s staff and take advantage of their local knowledge.

A Sailor’s Paradise. All the literature, all the articles, and anyone you’ll ever meet who sails in the BVI will tell you that it’s a sailor’s paradise. Why? Because of the fab four: beautiful water, wind, navigation, and beaches. Because a few mosquito bites are a small price to pay for waking up in dream land for seven days straight. Because you meet outstanding people along the way, such as our new friends Neal, Mary, and Jenny from San Diego, CA; Claire from Milwaukee, WI; and Wade and Dave from Rochester, NY. All your new friends hop from Norman to Peter to Virgin Gorda to Anagada or to Jost Van Dyke; they can’t stop talking about what they saw while snorkeling, the next awesome beach bar, the next cool anchorage, and all the funny tales along the way. Happiness loves company.

The BVI stand firmly as a sailor’s paradise because you cannot just go once. There’s too much to see. Every new anchorage becomes your new favorite, and if you were to heed every BVI lover’s piece of advice on the best hook nook, you would have to go for the whole season. Now there’s an idea…

This article first appeared in the December 2012 SpinSheet.

BACK TO MAIN CHARTER PAGE