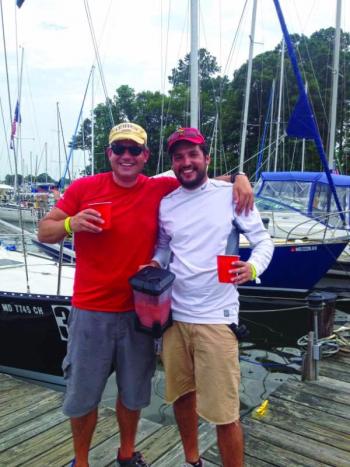 Three Tartan-10 skippers and crews made the trek to Solomons for the Screwpile Lighthouse Challenge.

The Tartan Ten fleet had three boats make the trek to Solomon's for the Screwpile Regatta. To keep the boats competitive with each other, the class made the decision to require all boats to race with their class jibs (#3) for the Regatta.

The Tens had an ugly first day on Friday as they struggled between being late to the starting line or being over early. The Tens all managed to have a good start on the second day only to have a train wreak at the first mark as two fleets hit the mark at the same time as the wind died.

The light air and the class jib proved to be a bad combination for the Tens on the second day. After a long day of racing the Tens managed to win the party as the blender came out at the dock and the tunes were cranked up.

The final day of racing on Sunday turned out to be a good day of racing as the Tens traded races back and forth. The regatta finished with Shenanigan taking first edging out Parrot Head by one point to win the Ten fleet.

The Tens regatta standings finished with Wabbit  coming third in the fleet. Overall it was a great regatta for the Tens to race against each other.