“How did your transit go?” This is the question most asked among cruising sailors gathered at both ends of the Panama Canal. Alarming stories, including hatches smashed by heaving lines, cleats pulled off decks, and dangerous wash from freighter props circulate around the fleet each season. Every boat skipper wants to know what to expect while transiting the 50-nautical-mile-long “ditch” of six locks, two lakes, and narrow waterways. Many will even volunteer to be a line handler on another boat before taking their own. Having been through the canal a few times now, I can say that every transit is remarkably different, and you can’t know just how it will go.

Our first time through was in 1997 while the canal was still under U.S. control with Panamanian overseers. We tied up in sultry, seedy Colon at the now non-existent Panama YC. A canal employee came to the boat and laid a measuring tape across our length and breadth. We navigated our way around the old city finding and paying the officers who could secure our transit date. I remember one large, uniformed man behind a desk lined with rubber stamps. He commenced a rapid-fire inking of our paperwork. The papers were tossed onto a huge stack. I was sure they would be lost, but somehow, within a day or two, we had our transit date and time.

On our second transit, in 2010, the canal was fully in the hands of the Panamanians. We hired a savvy taxi driver on the Balboa side who knew the location and order of offices to visit. At one point, he stopped at an unmarked door on the backside of a gas station and paid some money, maybe to a cousin, in order to avoid visiting and paying at another office. It all seemed pretty dodgy, but again, we got our transit date, for the next day. A Caribbean-bound transit is generally easier to schedule because there are far fewer boats traveling in that direction.

Two years ago, we used an agent and had the easiest time yet getting our paperwork processed and transit arranged. The canal administration had apparently entered the computer age. Using an agent, however, cost a third more than the cost of doing it on our own. To transit, a boat between 50-80 feet can expect to pay about $2400, though $900 will be refunded if there are no extra charges incurred. The canal fees may strain the budget of the typically frugal cruiser but it is still a bargain considering the alternative, an 8000-nautical-mile detour around Cape Horn.

For us, one transit started early in the morning and another at just before sunset. At the appointed time, we stood by in the anchorage, four 125-foot dock lines ready along with an equal number of line handlers. Fenders and plastic-wrapped tires protected the topsides. The Panama Canal Advisor was dropped off, and straight away, the action began. We’ve been assigned older, experienced advisors who sat back and observed, quietly giving directions when needed. In contrast, young, anxious advisors who paced back and forth barking orders, made the whole operation feel harried.

On the Caribbean side, three locks in quick succession raise boats 85 feet above sea level. The most common way for a cruising boat to lock up and down is center chamber and rafted together with one or two other boats. If you are the middle boat, the four required line handlers and lines might not be needed at all. Inside the lock, heaving lines come to the boat, lines go ashore and the doors shut. A loud bell rings. The water being pumped in creates enough turbulence to send the raft of boats all over the chamber if the lines aren’t taken up properly.

On our Caribbean-bound transit, we tied alongside a tourist boat and they did all of the work handling lines. Fifty or so curious passengers lined the rails, gazing down on us. We let our daughters, aged seven and nine at the time, field a barrage of questions such as, “Where do you anchor at night in the ocean?” and “What do you eat?” and “How many sharks have you seen?”

All of our transits have been done over two days. Spending the night on a mooring in Gatun Lake provided the chance for a freshwater swim. We just had to disregard the warnings from locals about crocodiles! Four boats from four different countries were tied to one mooring. It made for a very international gathering of sailors that went quite late into the night. The 5 a.m. start the next morning came much too early.

In three transits, we’ve had just two scary moments. In one case, our young advisor, eager to stay on schedule, told us to cast off the lines too early. The turbulence, not yet subsided, pushed us into the side of the lock leaving a long scar on our aluminum rub rail. Another time, we were the center of three rafted boats quickly approaching a lock when the doors got stuck, constricting the entrance. Too wide to pass through, the three boats had to turn around and move in the opposite direction. This required reverse propulsion on one side of the raft and forward on the other. There was a lot of yelling and cursing among the three advisors and three skippers. It was definitely a case of “too many captains.”

On the Pacific side, three more locks drop you back down to sea level. It is basically the same process as locking up but the lines must be eased simultaneously.

Once past the last set of doors, the raft breaks apart, and your boat is in a new ocean. Drop off the advisor, and you are done. It’s a good feeling. Okay, so maybe it’s not as big a deal as doing the Northwest Passage or rounding Cape Horn. However, getting through the Panama Canal relatively unscathed is an achievement and a milestone in one’s sailing life. Our plan is to head back through the canal for the fourth time this April. We’ll see how it goes.

About the boat: Elcie is based out of Oxford, MD. Returning this year from two seasons in the Pacific, Jessica and Richard Johnson are currently leading Expedition Charters as they make their way home toward Oxford. The schedule includes the Panama Canal followed by two northbound legs to the Chesapeake. Those interested in joining as expense-sharing crew may visit elcieexpeditions.com 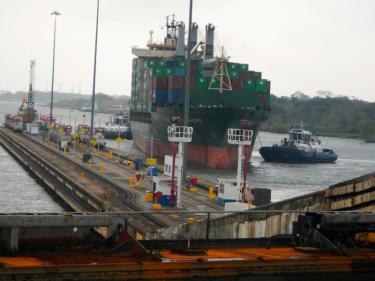 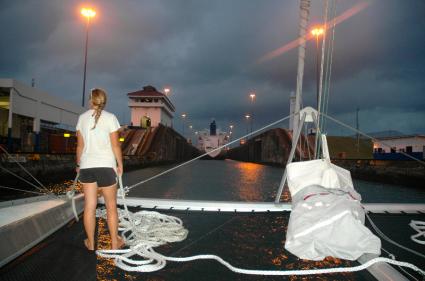 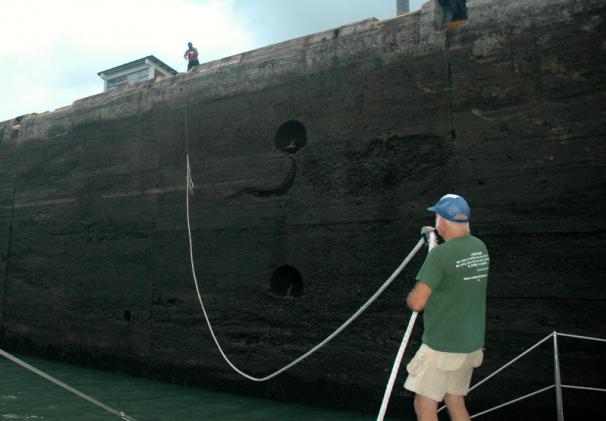 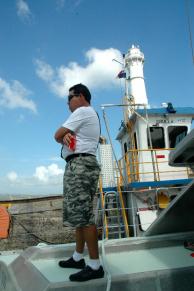