Advanced Speed Tips: Getting a Handle on Mainsail Twist

Technically, twist is the change in the angle of attack from the bottom of the sail to the top. Twist is necessitated by the wind speed changes, hence changing angle relative to the boat as you move away from the water. The drag induced by the water slows wind near the surface and shifts it relatively further forward, as opposed to the faster-flowing wind further aloft. This effect is exaggerated at lower wind speeds.

In the real world, twist means the leech of a sail must open up to some degree as we move from bottom to top.

In mechanical terms, any time the distance between the clew and the head is shortened (easing the mainsheet or boom vang), twist increases. The same length of fabric is now strung between two points that are closer together, so the leech of the sail opens up. Conversely, pulling down on the clew reduces twist, closing off and rounding up the leech.

A tight, round leech creates power and forces the boat to point, but it can also cause airflow to stall or overpower the boat (creating too much helm and heel). A twisted leech profile promotes airflow in light air when it’s hard to get air to stay attached. In heavy air, the flatter, more open sections depower the sail and help keep the boat on its feet. 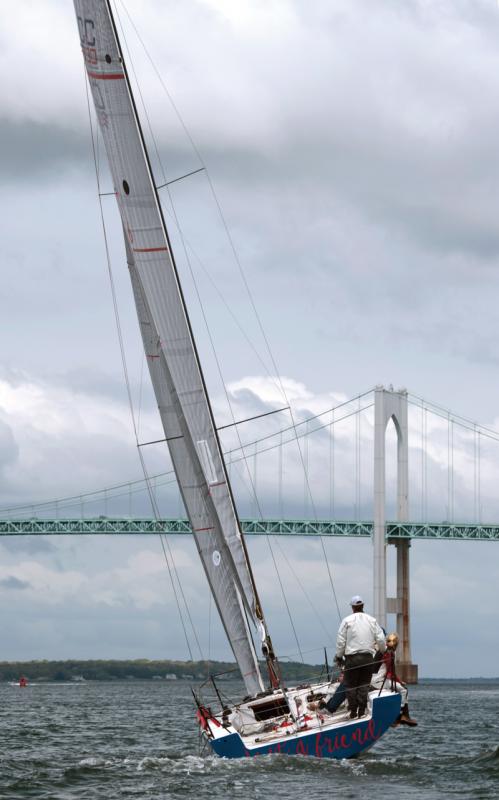 Having the right amount of mainsail twist is perhaps the single biggest key to upwind boat speed, especially on the new breed of fast sailboats that often relies on bigger mainsails and smaller foretriangles. A competent mainsail trimmer can get you in the ballpark, but the true boat-speed virtuoso understands, feels, and implements changes on a moment-to-moment basis, which makes the real difference.

In a very real sense, mainsail trimmers are driving the boat as much as the helmsperson. That’s why you often see trimmers hunched over (usually directly in line with the view of the helmsperson!), as they ply their trade. They’re looking at the same inputs to guide their sense of feel to dictate the appropriate reaction: angle of heel, jib telltales, boat speed, waves, and wind angle.

In general terms, you can think of mainsail twist in three modes: light, medium, and heavy air.

In light air, use extra twist and an open leech to promote attached flow and aid in acceleration. The top batten will be open, pointing three to 10 degrees to leeward from where the boom is pointing, and the top telltale should flow aft. Sail shape in light air will be full, so it’s important to keep the leech open and twisted to keep the sail from stalling. Once twist is set, position the boom on the centerline with the traveler for maximum power and pointing. This means that the traveler block itself will be well above the centerline.

In medium conditions the boat should be moving well, so leech tension can be increased and twist reduced. This will force pointing. Overall sail shape will be flatter, so there is less danger of stall. If the boat is up to speed, it’s okay to reduce twist to the point at which the top telltale stalls (disappears behind the leech). The traveler will drop so the boom doesn’t get above centerline, and it will be lowered further to control heel as necessary. Using the traveler to control helm and heel in moderate conditions allows the trimmer to use twist to balance speed versus pointing.

In heavy air, control of heel is paramount. More twist will help keep the boat upright. The boat will typically have to sail at wider angles (foot) to have the power necessary to blast through waves, and that will generate more heel. In smooth water, the helmsperson can “feather” more, or let the inside telltales lift in puffs. The overall sail shape will be as flat as possible, which will help induce twist and open the leech.

The traveler, which is great for fine-tuning balance in moderate conditions, usually does not provide enough gross change to handle big puffs, so twisting the entire sail with the mainsheet works best. I typically pull the traveler up a couple of feet above the leeward coaming and play the sheet to control heel. In windy conditions, use the boom vang to help augment the mainsheet.

On a moment-by-moment basis, the game is simple. The mainsail trimmer constantly tries to reduce twist (trimming harder) as long as the boat speed is up and heel is under control. The goal is to point as long as speed and helm allow. Keep in mind the golden rule: speed first, then try to point.
Hypothetically, here’s how the thought process would work on board for a target boat speed of 7.2, true wind angle 38 degrees: Out of the tack, ease the mainsheet at least until the top telltale flows, or until heel is under control. Heel is paramount. If you need power, pull the traveler up with one hand as you ease the mainsheet.

Suppose speed turns at 5.8 and is building. Sheet harder as the speed comes back up to 7.2, lowering the traveler as necessary. Once you’re up to speed, full trim. If the tack is more into the waves than the opposite tack was, don’t sheet as hard. If slowing, ease a half-inch or so of sheet for more twist. If the skipper presses for speed but there’s too much heel, ease some more. If the speed climbs too rapidly over target, sheet harder as the helmsperson feathers up.

Suppose a set of waves comes. Press and build speed over target and ease the mainsheet. A small amount of extra heel is okay, but not too much. Through the waves, back hard on the wind and sheet harder. When you reach a good angle, good speed, and no big waves, sheet harder still to make the driver work and take a bite to weather. If you get carried away and speed slows, ease a fraction. For a big wave, ease a bunch over the top as the driver bears off to avoid the slam. Stay eased until speed comes back, then gradually sheet harder. And the game continues…

Getting the correct twist is a dynamic, ever-changing proposition, and it’s a little different on every boat. There is no one magic combination of twist versus traveler that works for every boat, so be prepared to re-educate yourself on each boat.