Chessie Racing, a Tripp 62 owned by George Collins, was first to finish among the Friday starters in the 38th biennial Annapolis to Newport Race (A2N). Chessie Racing crossed the finish line off Castle Hill Lighthouse at 5:23 p.m. local time on Sunday. The baby blue-hulled racing boat posted an elapsed time of 2 days, 6 hours, 27 minutes and 37 seconds. 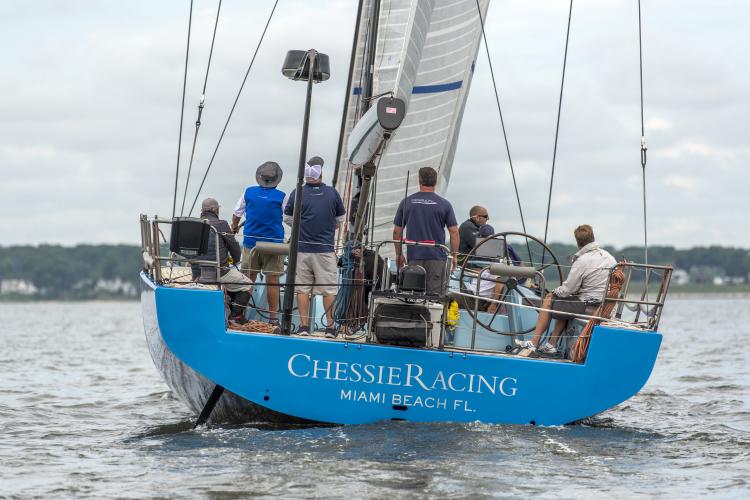 Yellow Brick Race Tracker has Chessie Racing winning PHRF 1 class with a corrected time of 3:04:57:09. Jumping Jack Flash, a Davidson 50 owned by John Davis, was the nearest PHRF 1 boat – 134.8 nautical miles from the finish – at 7 p.m. on Sunday.

Collins, who almost singlehandedly funded the Chessie Racing campaign for the 1987-88 Whitbread Round the World Race, had a strong team of mostly professionals aboard. Chris Larson was aboard as navigator and tactician and called for a course just east of the rhumb line for most of the Atlantic Ocean passage. 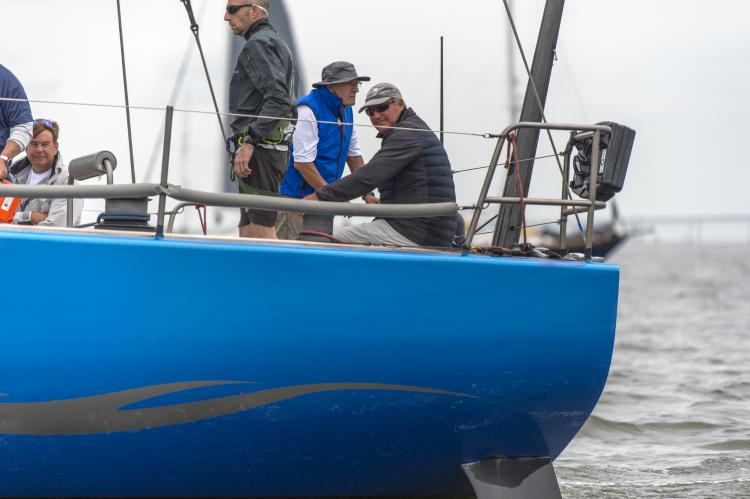 “Chris Larson did a spectacular job. Every tactical decision he made was outstanding,” Collins said. “Our entire crew work was absolutely phenomenal. We had a bunch of rock stars aboard.”

This marks the second time Collins has skippered a boat that was first to finish the A2N. He once owned a Santa Cruz 70 called Chessie Racing that set what was then a course record of 47 hours and 45 minutes. That boat was formerly known as Pyewacket when owned by Roy Disney.

Six classes consisting of 61 boats started Friday morning in a southerly breeze of 4 to 6 knots. Chessie Racing was the first boat to benefit when the breeze kicked in just past Cove Point and pulled away from the rest of the fleet that was still plodding along in light air.

Chessie made the turn at Chesapeake Light and had southwesterly winds at her back for most of the Atlantic Ocean passage. Collins said the breeze held steady in the 12 to 16 knot range for much of Saturday.

“Once we got offshore, the conditions were unbelievable. We put up the A3 (spinnaker) and hauled almost all the way to Newport,” Collins said. “Saturday’s sailing was some of the most enjoyable I’ve ever experienced. It was a downwind run the whole way in the ocean.”

Chessie Racing saw its maximum speeds on Saturday night when the wind piped up to 22 knots. Only real hiccup came about seven miles from Newport when the wind shut off and the 62-footer parked for about an hour.

“It was frustrating to be reading zeros so close to the finish,” Collins said.

When the wind finally kicked back in, Chessie clocked consistent speeds of 8 to 10 knots and cruised into the Narragansett Bay to get the gun.

Find results for the A2N here

Find photos of the Friday and Saturday starts here.