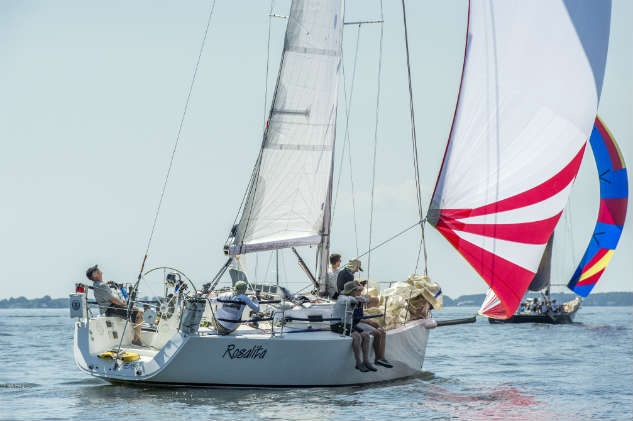 Skipper Rick Hanson and his crew aboard Rosalita were out to sea for almost three and a half days. Those seven sailors aboard the J/109 could have relaxed at any time during the grueling passage down the Chesapeake Bay and up the Atlantic Ocean.

After weathering a nasty storm on approach to Block Island and strong winds exceeding 20 knots shortly thereafter, the exhausted crew could be forgiven for easing up a bit. In fact, the exact opposite happened as the crew worked even harder toward the end of the 2017 Annapolis to Newport Race.

Kyle Hanson, the skipper’s son, did the math and figured out that Rosalita had a shot at capturing class honors if it could complete the final 12 miles in a certain time.
“We were cold, wet and tired, but we pushed like crazy coming into Newport,” Rick Hanson said. “I give the crew an awful lot of credit. These guys didn’t let up for a second for the entire race. They were constantly pushing the boat.”

That effort was rewarded when the handicaps were computed and the Rosalita team learned that it had captured PHRF 2 class by less than two minutes on corrected time. That last-gasp push down the stretch proved crucial to the J/109, overtaking Shinnecock for the victory. 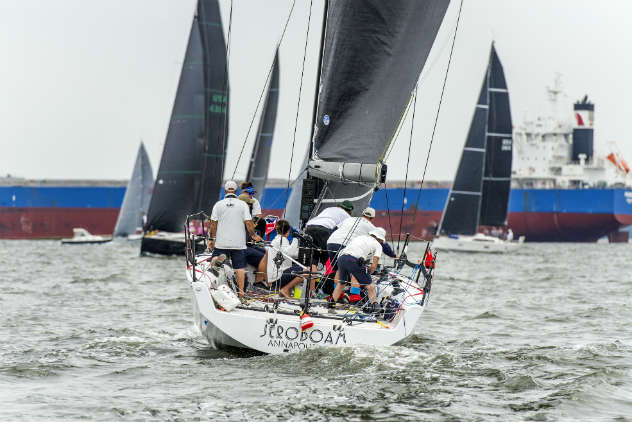 “We are absolutely ecstatic,” said Hanson, a resident of Avondale, Pa. “We put a lot of time and effort into preparing the boat for this race. To come away first in class is simply spectacular.”

Rosalita crossed the finish line off Fort Adams almost three hours later than Shinnecock, but is owed 21 seconds per mile by the J/120. This was the first Annapolis to Newport Race for Hanson, who has been racing the J/109 for eight years.

“We normally do distance racing on the Chesapeake Bay,” said Hanson, who has secured class honors in the Governor’s Cup multiple times. “This is our first time taking the boat offshore so it goes without saying that we are extremely pleased with this result. Annapolis to Newport was on our bucket list. Just completing the race is an accomplishment. Winning is icing on the cake.” 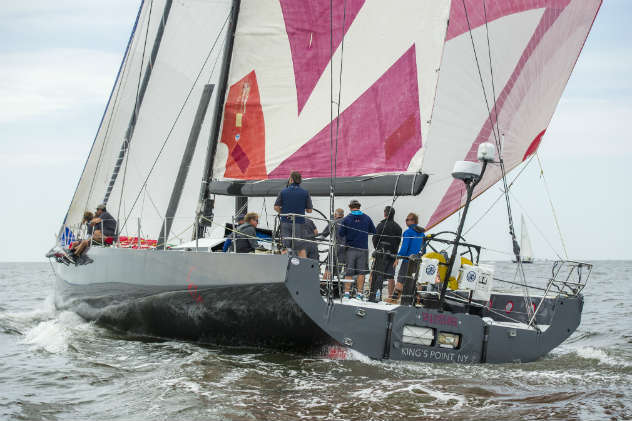 Similar stories were told by the other class winners as the sea stories were told Tuesday on the docks of the Newport Yachting Center. Sailors braved spitting rain and unseasonably cold temperatures to perform the work of stowing sails and other post-race boat breakdown.

Just down the dock from Rosalita, skipper Jimmy Praley could only lament how close Shinnecock came to winning PHRF 2. This was the second straight runner-up result for the boat, which was beaten by fellow J/120 Saykadoo by just 43 seconds in the 2015 Annapolis to Newport Race.

Praley and his crew could console themselves with the accomplishment of winning the J/120 sub-class, which consisted of five boats. Shinnecock came from behind during the latter stages of the 474-nautical mile race to beat Heron (Greg Leonard) by 1 minute, 22 seconds.

“We are very, very excited. It’s always great to walk away with the win in a one-design class like this,” said Praley, a lifelong Annapolis resident. “Any one of the 120s could have easily won this race. They are all so equally matched. We put together the strongest crew we possibly could and worked really hard. We never stopped adjusting sails and changing gears.” A few piers away, owner Laurent Givry was all smiles as he stood in the cockpit of Jeroboam and talked about his boat’s victory in PHRF 1 class. Givry got his first taste of the Annapolis to Newport Race in 2015 and placed sixth out of 14 entries in PHRF 2 with a Beneteau First 36.7. The Fairfax Station, Va. resident upgraded to a Farr 400 and that high-performance racer is on a roll, having captured the Virginia Cruising Cup as overall winner of the Down the Bay Race just one weekend before.

“We did a lot of preparation for this race and everything happened just as we planned,” said Givry, who had renowned professional Dee Smith aboard as navigator and tactician. “This boat is very fast and our speed was very good in every type of condition.”
Givry is relatively new to serious sailboat racing and has been working closely with Smith to get up to speed on the Farr 400. Mike Beasley was the other pro on Jeroboam and served as watch captain, helping direct the group of amateur sailors aboard.

“The difference between this race and the one in 2015 is that I had two professionals onboard. That makes it a whole different ballgame,” Givry said. “As amateurs, I thought we did quite well sailing the boat. Dee and Mike kept us on edge 100 percent of the time. I think I slept a total of six hours in two days.” 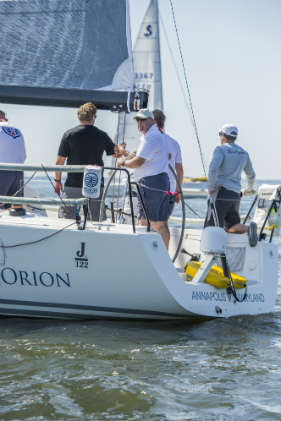 Jeroboam posted a corrected time of 3 days, 45 minutes, 45 seconds, and that was good enough for the overall victory in PHRF, which had a total of 29 boats in three classes.

“We are very, very happy,” Givry said. “Winning our class was the goal. Having the best time in PHRF is the cherry on top. For me, it was not an option to lose. We have been practicing four or five days a week for two months.”
Orion almost didn’t make it to the starting line for the Annapolis to Newport Race. The J/122, owned by Annapolis Yacht Club member Paul Milo, was dismasted during Key West Race Week and repairs took much longer than expected. Milo said the new mast showed up two weeks before the June 2 start and it was a mad scramble to get it stepped into the boat.

Jay Herman of Annapolis Rigging did a remarkable job of getting the rig ready, earning high praise from Milo for his efforts. Several other industry professionals in the Annapolis area also contributed to making sure the J/122 was properly prepared for an offshore passage.

“A lot of people pitched in to make this race happen for Orion,” Milo said. “I’m just so thankful for all the people that helped us out.”

Orion put forth a fantastic performance, leading the entire fleet for much of the way and capturing line honors among the Friday starters with an elapsed time of 3 days, 5 hours, 32 minutes, 27 seconds. The J/122 wound up winning IRC 2 class on corrected time by about 21 minutes over Kenai, a J/44 skippered by Chris Lewis.

“I am absolutely thrilled to win Annapolis to Newport,” Milo said. This is a premier event and it’s just a terrific feeling of accomplishment to be a class winner. My crew was just phenomenal. Everybody did exactly what they were supposed to do.”
Milo was extremely impressed with the work of navigator Libby Greenhalgh, who performed the same role for Team SCA in the last Volvo Ocean Race. 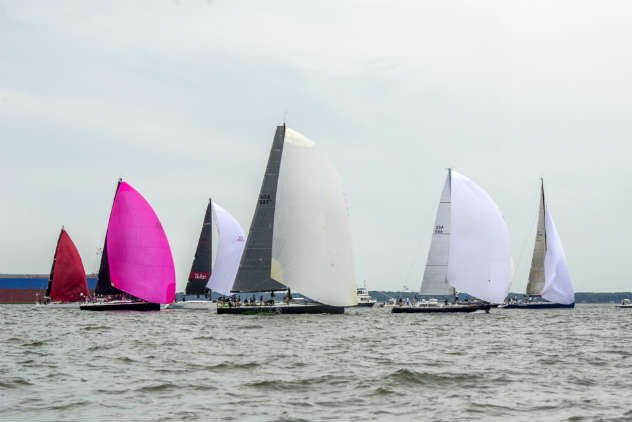 Black Pearl, a Carkeek 47 skippered by Stefan Jentzsch of London, took top honors in IRC 1 and was also overall winner within IRC, which had 15 entries. Black Pearl finished second overall behind the Volvo 70 Warrior and earned a corrected time of 2 days, 18 hours, 45 minutes, 32 seconds.

Nanuq, a Sabre 426 owned by Glenn Doncaster, was winner of PHRF 3 — largest class in the race with 14 boats. Jerry Latell and Matthew Newborn served as watch captains onboard Nanuq, which beat the Navy 44 Gallant (Midshipmen Robert LaGuardia) by 45 minutes, 20 seconds on corrected time.

"We have a really great team and that’s where it all starts,” Doncaster said. “They manage the boat well and take care of one another. They feed off each other’s strengths. I could not be more proud of the crew. We were constantly changing sails to keep the boat going.”

Ironically, Nanuq was runner-up in PHRF 2 in the 2015 Annapolis to Newport Race, losing to the Navy 44 Swift by 1 minute, 31 seconds.

“It’s really a great feeling. You don’t get the opportunity to win a race like this too often,” Doncaster said. “We paid attention to our game plan and kept executing it. We tried not to sail
too many extra miles and that was very important. I think when we got into the ocean that’s when we started to shine. We really got rolling offshore and kept the hammer down.”

Find more about the special awards at this event here.