A BIG Week of Racing for Stars and Schooners

Day One at the 2018 Star Worlds was frustrating, but there's more to come in the worlds of Stars, schooners, and other racing fleets... here's your SpinSheet racing roundup for the weekend of October 5-8 (and a bit beyond).

Racing for the iconic and coveted Star World Championship trophy has been delayed until day two of the event (today, Oct. 9). Sailors arrived at the host club Tred Avon Yacht Club anticipating light-air racing and were unfortunately met with glassy waters on the Choptank River yesterday. All 62 teams remained on shore all afternoon rehashing strategies on dealing with the current and watching weather forecast for the week.

The 2018 Star World Championship features one of the most diverse yet well rounded fleets of sailors in its recent history. In total, 62 teams from 12 countries represent 13 out of the total 15 districts of the International Star Class and 41 out of its 79 total fleets. 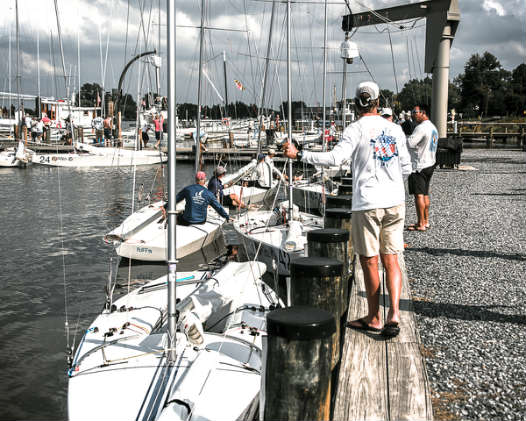 The youngest member of the fleet is Max Hetherington-Young at a mere 16 years old, a total of 65 years younger than the oldest sailor in the fleet, John Chiarella (81). With a large portion of younger members racing, the average age is 48 years old. 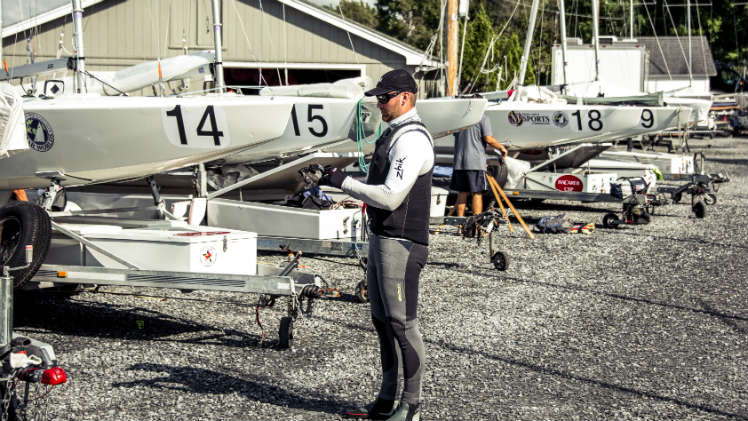 Class president Hubert Merkelbach’s mission in office is to help encourage that growth. “For me, I am happy that there are younger people in the class. The big subject for the future and my personal mission as president is to get new people in,” he said.

“Providing the boats, organizing clinics, and having heroes such as Paul Cayard (USA) and Torben Grael (BRA) racing alongside should encourage new sailors to join our events, or at least we hope so.” 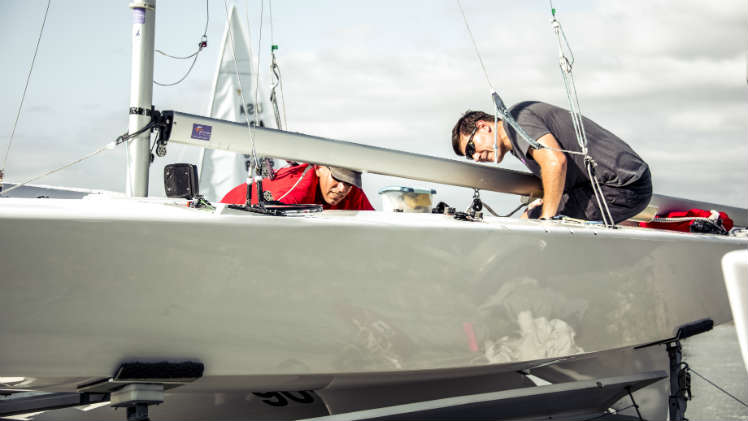 The entry list includes one brand new International Star Class member Manu Hens from Belgium sailing with Edoardo Natucci (ITA). This will be Hens’s first regatta ever in the Star. 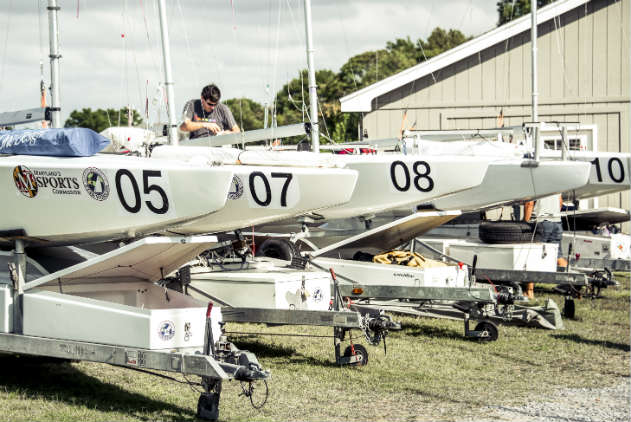 “I have been to one regatta in the Star, last weekend in Lake Garda,” said Hens. “I have been dreaming about sailing Stars since I was 16 when I saw them for the first time at Keiler Woche. I was amazed by these boats. I think the Star is the most beautiful one-design boat I ever saw. I talked to Augie [Diaz] for some information about the boat and told him I wanted to start properly with a good crew and he introduced me to Edoardo Natucci… I am so happy to be sailing with all of these legends. It’s a dream come true.” Follow along this week to see how the competitors fare against Oxford’s challenging conditions, if the “young guns” in the class will take up the leaderboard, and who will be crowned the 2018 Star World Champion.

Race Day 2 (Tuesday) began at noon (UTC -4) with Race 1 of the series. All amendments to the racing schedule will be published on the event website as soon as they become available. 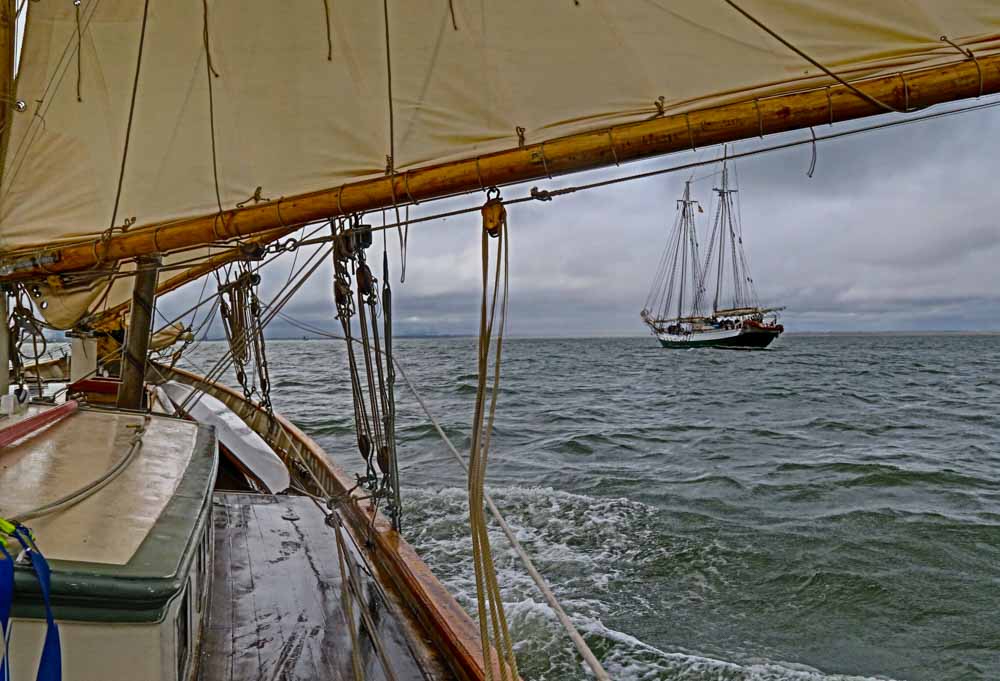 As are all sailors and other boaters (especially the folks hosting the Powerboat Show), all eyes are on the weather for Thursday. The Great Chesapeake Bay Schooner Race is slated to begin off Annapolis at 1 p.m. on Thursday (oct 11). Organizers made the following announcement:

"The Race Committee is keeping a close eye on storm Michael and its track.  Depending on which model the storm follows, the Chesapeake may experience 15 knot Southerlies, 35 knot winds from the NNW, or even nearly flat calms.  So much depends on exactly how the next couple of days unfold.  In the event that there is cause to believe that extreme weather will impact the Chesapeake during the Race, the Race Committee and the Board will make an announcement at the All-Hands meeting on Wednesday as to whether the race will continue.  While we all love to sail, safety is paramount."

“Finally, a good day to race,” says Lin McCarthy in her Southern Bay Racing News You Can Use. “Yesterday, the final day of the CCV FALL SERIES, started out with the all too common postponement in hopes of wind yet to arrive. But, it did. It was light in the first race, but the breeze continued to build to moderate for the final race of the series.

“These two races were run on drop mark courses and crews in the spinnaker classes got a decent workout. . .  although one did almost capture a mark with their chute.”

Fall Series overall awards will be presented at the CCV Awards Party on November 16 at the Historic Post Office in Hampton.

Next Saturday, October 13, racers will compete in the Round the Lights Race, a Southern Bay favorite run by Old Point Comfort Yacht Club. RTL is a pursuit race – slower boats start first – the idea being that everyone finishes at the same time. . . sort of! The start/finish lines are in Mill Creek. The skipper gets to choose the order in which to round the lighthouses and in which direction. Non-spinnaker boats get an 18 second a mile credit for the overall award. Cruisers receive cruising credits. Expect classes to include at least PHRF A, B, C, Non-Spin (2 headsails allowed) and Cruising. If three or more multi-hulls sign up, the event chairman says there will be a multi-hull class.