When the leg from Sydney, Australia to Hong Kong started back on January 2nd, the prevailing wisdom was that the fleet would be racing 2,500nm to the equator for what would, effectively, be a restart in the race. And that’s exactly what happened -- six of the seven teams were bunched together in the Doldrums after ten days at sea, each searching for a zephyr of breeze that might scoot them free of the pack.

But it was that lone gray boat down at the bottom, Sun Hung Kai/Scallywag, forgotten and alone back in the cheap seats, that found themselves with the advantage as the fleet broke free. As they continued to fall behind, skipper David Witt and navigator Libby Greenhalgh did what we’ve all wished we could do on a race course -- they just cut the corner.

[For anyone that’s interested, Scallywag is effectively a privately funded entry by Chinese businessman Lee Seng Huang. He’s executive chairman of Sun Hung Kai, a financial company, which is how he came to have the resources to fund a Volvo campaign. The Scallywag name was a suggestion made by his daughter and carries over from his 100ft supermaxi (formerly Ragamuffin 100) of the same name. It’s is Mr. Lee’s hope that this Volvo campaign can “promote competitive sailing in Asia and build a long-lasting youth sailing legacy in the region.”]

One of the last entries into the event, Scallywag features a talented but less heralded crew. Their skipper’s last Volvo Ocean Race was nearly 20 years ago and their navigator was brand new to the team for this leg. The rest of the crew was short on Volvo experience too - a quick scan of their resumes showed only four sailors with any Volvo experience at all. It’s was no wonder that the smart money continued to anticipate that the fleet would catch up to them.

But five days from finishing, having extended their lead to nearly 70nm, Scallywag was showing no signs of giving up their advantage. Perhaps feeling the pressure to keep the lead and push the limits, Australian rookie Alex Gough got careless. He headed out onto one of the outriggers to clear a sheet and wasn’t tethered to the boat. The boat came off a wave and he was tossed into the water. The crew quickly reacted to the man overboard and video of the recovery shows a textbook maneuver to stop the boat, get eyes on the unlucky swimmer, get him back on the boat, and get going again. The video also shows a well deserved ticking off by the skipper, who likely had even more choice words once the cameras were off.

Despite the time lost going back to save their teammate, Scallywag didn’t set a foot wrong again and arrived first to their home port of Hong Kong. It’s hard to imagine that the crew’s expectations for the leg had them on the podium after their performance over the first three legs, so it’s understandable that everyone was all smiles when they crossed the line. We’re also guessing their first real, not-freeze dried, food tasted just a little bit better too. 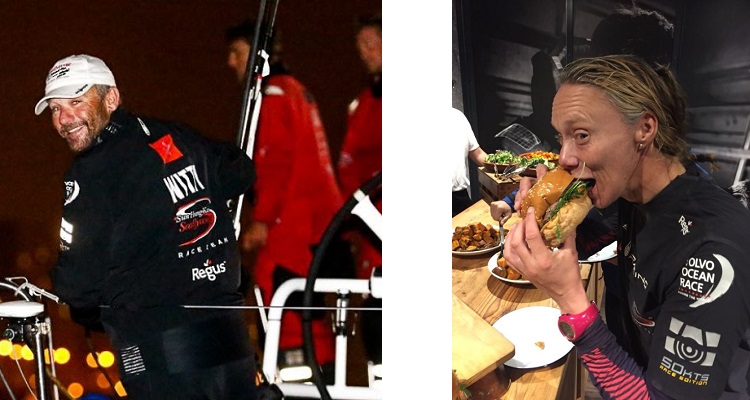 As you might imagine, their victory has been overshadowed by Vestas 11th Hour Racing’s terrible collision with a fishing vessel just 30nm from the finish, which lead to the tragic death of one of the fishing vessel’s crew. As Vestas comes to grips with the loss of life, the extensive damage to their boat, and the toll it all has taken on their crew, Scallywag’s victory is certainly put into perspective. It doesn’t make it less remarkable, but it’s a reminder that at the end it’s just a race and everyone on the water getting home safely is really the only thing that matters.