In October 2020, Hampton sailor, race committee volunteer, and Southern Bay reporter Lin McCarthy reached 1000 issues of “Southern Bay Racing News You Can Use,” her free weekly sailboat racing newsletter with 2000 subscribers for which she’s never had a sponsor. Find the short version of this interview about the story of SBRNYCU in Lin's words in the November SpinSheet and the long version below: 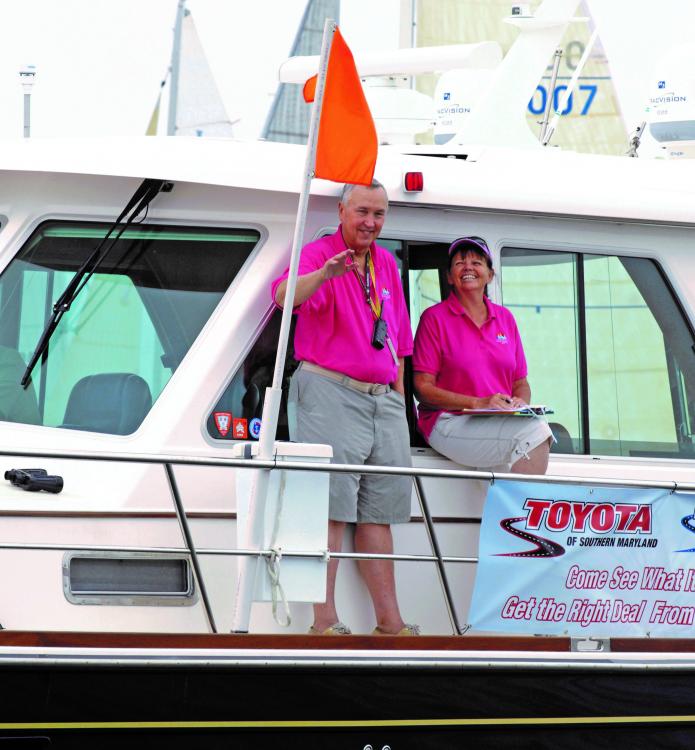 How and when did you begin Southern Bay Racing News You Can Use?

Well, I have always loved to write and since undergraduate days, I had been in situations where I put the skill to use, a lot of the time it was sports related. To my delight, I fell into eight years as the Sports Information Director at a small college in North Carolina, and while there, was also a stringer (college sports) for one of the area newspapers that published twice a week.

When (my husband) John and I returned to Virginia, we learned to sail, bought a boat, and went racing. And, loved it. I began doing a monthly newsletter for the Willoughby Racers.

Then, SpinSheet was born, and I contacted Dave Gendell and asked to send racing articles from here to you all in Annapolis. The SpinSheet attachment gave me an entrance to various sailing events and that was a great opportunity. Dave was terrific and working for him and Mary and SpinSheet became the bedrock of my sailing writing development. I got to see and meet a lot of great people, who all loved sailing and racing.

Eventually I became involved with CBYRA as Region vice-prez for three years, and it seemed obvious that the southern Bay (aka Region 4) would benefit from being more united and informed of sailing events and plans. We were so spread out geographically that we did not resemble the other 3 CBYRA regions.

So, April 2000, Southern Bay Racing News You Can Use hit the inboxes. Any southern Bay club or organization was invited to use any of the SBRNYCU content as long as they gave credit to the source. Remember, email had taken hold by then, making a weekly issue feasible. As a large scattered group, we were then able to share information on happenings, plan to support each others’ events, and see for real that being a “big frog in a little pond” wasn’t necessarily the only way to go. Our differences make our region special and it is the racing that keeps us all in tune.

Where does the “southern” boundary begin for your purposes?

For starters, the Southern Bay area is north to the banks of the Potomac (all of eastern Virginia including the Eastern Shore) and south down to Elizabeth City, NC, and OBX, and sometimes beyond. We have readers who live in NC and do a lot of their racing up here. They are great folks and great racers and we love having them involved in all aspects of the racing programs.

Now, if you count the Southern Bay expatriates, we are pretty wide spread. For instance, last week I heard from a Southern Bay racer who now lives in Montana! He still reads the newsletter and stays in touch with racing friends here. Others are in places like the Caribbean, on the west coast, in Florida, and beyond. SBRNYCU has been around long enough to have folks who have moved around, away from the Chesapeake. But, once a southern Bay racer, always one. . .with permanent perks!

At the peak of the season, how long does it take you to compile it?

I layout the format for each issue a month or so ahead. Knowing event schedules, etc. helps a lot. Then, I start working on each specific issue at least a week ahead – building it bit by bit. But, it’s during the weekend that available time gets thin. Regatta results and happenings all come to a head about the same time – late Sunday. A lot of the clubs are really good about sending in the results as early as they can. The idea is to have everyone possible in the Monday morning issue, immediately after their regattas.

Things are getting much better now, but during the height of covid impact, it was hard for anyone to know whether planned events would happen or not. The clubs and event organizers were great then and we all have now pretty much gotten through a tough time.

How many subscribers do you have?

SBRNYCU reaches approximately 2000 readers every Monday. The list has built over the years and now publications like SpinSheet carry references to SBRNYCU, as do some clubs and other boating concerns. You can only get your own copy of SBRNYCU by direct email and it is always FREE. Every person on the list has asked to be there. All ya’ gotta do is ask.

Have you ever had a sponsor?

Nope, never had a sponsor and don’t ever expect to in the future. The racers send information and the “staff” works for free. Murphy, the Racing Beagle, could demand milk bones and Bud Light, but doesn’t. SBRNYCU supports a lot of events—workshops, regattas, special happenings—by giving special attention to the happening.

Do the grammar police ever comment on your missives?

Yes, but not in a truly critical way. A lot of time they chuckle and agree. The feedback is usually immediate—return email—so I think it is pretty much honest feelings. Murphy gets “Ahooo” dittos and every now and then we share someone’s joke or tale they have related.

Tell us about a funny typo you’ve made (as the best of us do).

Oh my gosh. I have made soooooooooooo many! What I can say is, things are more risky with “spell check”—you cannot trust it!

What drives this labor of love?

I have had such good fortune to have been able to race, own a boat, and be part of a crew of friends. Most of my friends today, somehow or another, have ties to sailing. Racers are special people who appreciate “the grind” (physical and psychological) required for success.

My mother grew up on Willoughby Spit, so the Chesapeake Bay has always been home to me. John and I both love the competition of the sport. We got in late, we were in our early 40’s when we decided to learn to sail, and it did not take but one time in a Wednesday night race to be stuck forever.

I love all of that and also love to write. I especially enjoy sharing people’s successes. I think having raced I can understand what they are doing out there and how difficult it can be. And, how meaningful sailing accomplishments are.

Shooting for two thousand?!!  I think I better stick with aiming for “the next issue” [inserted smiley face]