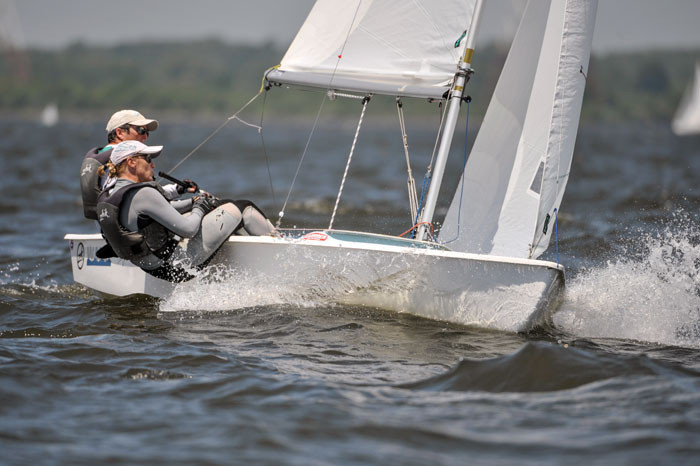 Through the years, I have learned a lot about successfull sailboat racing by listening to the words of regatta winners, often in "From the Winner's Circle"-type articles. So with that in mind, I'm interviewing myself for this Winner's Circle feature, as with my skipper Carol Cronin, I won the Woman's Snipe World Championship this year!

When and where was the regatta, and how were sailing conditions?

The 2018 Snipe Women’s World Championship was sailed north of the Newport Bridge on Narragansett Bay, RI, for four days of racing in late August. On the water it was a true test; we sailed in everything from light and lots of current to pretty big breeze. The Snipe Class stipulates that for the Women’s Worlds, 18 knots is the wind ceiling as we generally sail with smaller teams than do the co-ed regattas (averaging perhaps 265 pounds/team rather than 300), and we really enjoyed the last day sailing at the top of our wind range.

We had a super tough fleet—32 boats from 10 countries and three continents—and got to sail nine races. The Women’s Worlds is held every two years, and four of the top five skippers from 2016 (held in Italy) were at Newport to compete. This year the top three boats were only separated by five points, so every point was important.

What worked well as far as boat setup goes?

With such a range in wind conditions, we worked through a range of rig setups and other changes to how we sailed the boat. One of the great things about the Snipe is that you can tweak a bunch of things from sail setup items such as cunningham and jib leads to rig setups, including rig tension and spreader angle and length. We did a good job of staying in touch with weather forecasts and using that information to set up our spreader length: a bit shorter to depower, a bit longer for more power. Some things need to be tweaked on shore; some things can be done on the water. If you don’t feel fast—try something different!

How did you approach the competition?

We knew it was going to be a tight fleet with no room for error. We focused on consistency—and persistence. I have a T-shirt with a cartoon llama on it and it states “No Drama Llama.” That little dude was our mascot for the event. We focused on having confidence in our boat speed and making good race course decisions, so we didn’t have to start exactly at the favored end in lots of traffic and current—that was a pretty high-risk decision. We had some not-so-great starts, but would soon return our focus to going fast and making good decisions. We never won a race, but our drop race was a seventh; all our other races were fourth or better. One race, we rounded the first weather mark in 17th—but finished the race in fourth. That was the result of making good decisions on picking boats up one by one rather than desperation moves, and of mental persistence in knowing that every boat we passed was a point less in our score line.
Any other tips on what worked well?

Four days isn’t a super-long regatta, but with roughly hour-long commutes (by sailing or towing by coach boat), every day was long. One of my favorite sayings at the end of each race day is “tomorrow’s racing starts today.” We made sure to eat/drink appropriately, enjoying a recovery beverage (my fave is Hammer Recoverite with a 3:1 ratio of complex carbs to protein) on the sail in after racing or at least right when we got off the water. Regattas can be tough on taking care of your body—they organize fun social events, but the timing and food may not be the best fit for individual sailors. We made a conscious decision to make sure we were getting “fed and watered” right for us. Also for a longer regatta, physical fitness is key. Although most of the regatta was physically stressful, having focused on cardio work (running and some interval work) and strength (lifting and core) beforehand let me wake up every morning ready to seize the day! Fitness helps a lot, even if you’re not working hard—it lets your brain work harder too.