The Time and Place for Aggressive Positioning

Just because you can do something doesn’t always mean you should. That “just one more” rum and coke, just because there’s an already-opened can of soda? Maybe not a good idea. Polishing off the tray of lasagna, because you’re “just helping to clean up”? Not if you’re trying to be healthy. Tacking on a random competitor halfway up the first beat, just because they’re there? Nope, not okay. 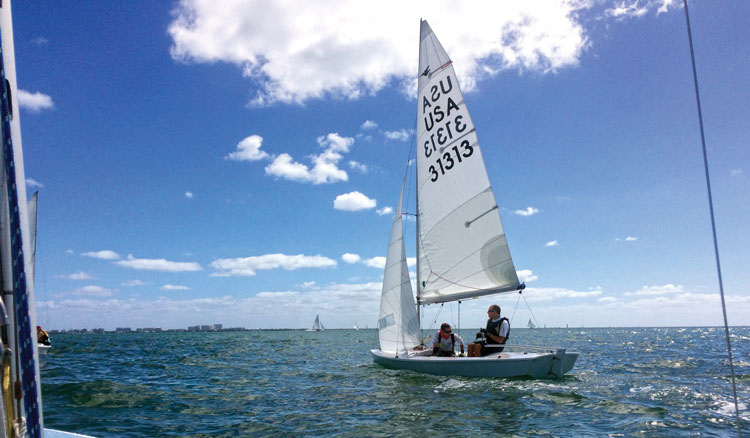 While there are some types of sailing that encourage aggressive positioning (like tacking on top of your competitors’ air, sitting on their breeze downwind, or using the rules as a sword rather than a shield), for the most part, in classic fleet racing, that kind of sailing can get you a reputation. And not a good one.

Certainly every one-design class is different. And different protocols are accepted in match racing, high school/college sailing, and elements in team racing. But for the most part, focusing on hindering your competitors’ experience—rather than on maximizing yours—is not seen in a positive light in classic fleet racing. Many people sail in the same one-design class for years or even decades. It doesn’t play out well for you in the long run to be “that boat who always tacks on people.” You may find that you get tacked on more in response.

There are situations where it’s fine—or even acceptable—to tack on someone, or to hover closely over them downwind in order to “steal” their breeze. Here’s a handy checklist. If you can’t honestly answer “yes” to at least one of these questions, you may be pushing things too hard… which can result in having no sailing buddies at the Saturday-night regatta dinner.

Is it the last day of the regatta?

Are you on the last leg of a race?

Are you tight on points with the boat with which you’re considering interacting?

Is it a regatta where the final standings really matter, or are you really out there because you simply love sailboat racing?

As you’re running through the list, deciding whether to tack on someone, be sure you consider alternative options. Do you really need to tack hard on someone, sending them to the other side of the race course? Or would a loose cover, where your bows are essentially even, but you are a few ladder rungs up to weather, work just as well? Or how about simply tacking on their line (not just to windward and on their air)?

Sometimes, you do honestly need to tack hard on someone. If that’s the case, do it effectively. Get it done—like ripping off a Band-Aid—and then get back to standard sailing style.

A corollary is that there are some situations where you can’t fault fellow competitors if they do tack on you. That may not be their goal, but they may have no alternative. For example, you may have found yourself way out on the left side of the course as you saw a sweet puff. You get in the puff, tack, and wow—there’s the mark! You’re right on layline, even though you have a quarter mile to go to the top mark. Other boats likely see that puff as well and will be headed your way soon. If you establish yourself on layline too early, there’s a good chance you’ll get tacked on.
Also, you can’t get grumpy with a boat that ends up tacking on you or taking your air if they are forced to do so to comply with the rules as they interact with another boat. If they have to tack to avoid a starboard-tack boat, and that puts them on your air, it’s not their “bad.”
I’m lucky enough to sail a bunch with a friend who is perhaps too careful about where she tacks. You know how it’s always good to look over your back shoulder right before you tack to double-check that you’re not going to tack right into someone? We generally also look through the jib window to make sure we’re not going to tack on someone. Sometimes it means sailing a boatlength or two before tacking, but it sure makes for a lot more fun at the regatta dinner.