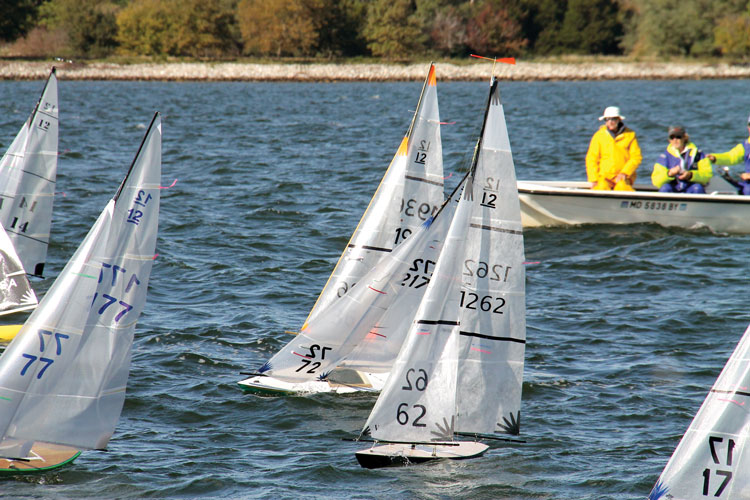 New Zealander Chris Harmer flew 10,000 miles to sail on the Tred Avon River. Local sailor David Ramos closed up his business in Stevensville, MD, and made the 25-minute drive to Oxford as well. And more than 35 other sailors from all over the United States and Canada converged on this sleepy Eastern Shore hamlet to compete in a tightly-contested test of skill and sailing ability. Not too unusual for a regatta on the Bay.

But the boats these sailors were piloting were 1/12th-scale radio-controlled (RC) sailboats. The regatta was the East Coast 12-Meter Championships. The sailboats themselves measured a whopping 59 inches long. 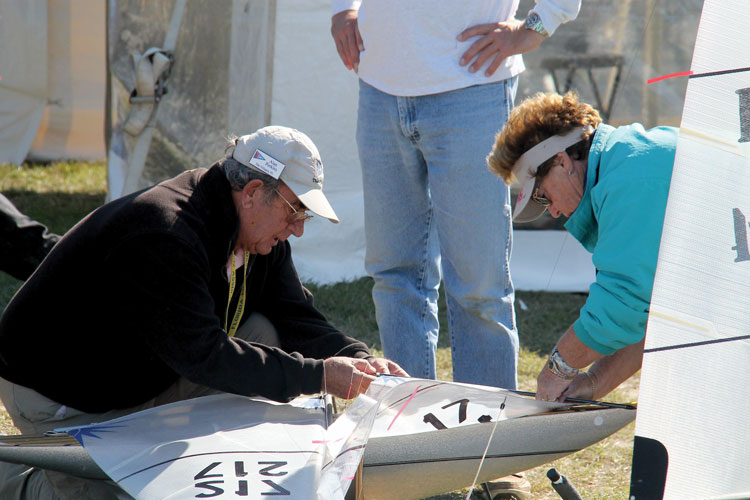 What is it that compels sailors to travel thousands of miles to sail miniature versions of well-known big boats—12-meter yachts, J-Boats, and Lasers to name a few?

“There are some RC fleets in New Zealand and Australia,” a frustrated Harmer recounted after a mechanical issue forced him to withdraw from one of the weekend’s heats. “But the level of competition here in the States is too much to resist, even if it means flying 36 hours to get here.”

“RC sailors come in all shapes and sizes,” Ramos says. “Some are over 80. Others are under 10. Some are ‘retired’ big boat sailors. Others have never pulled a sheet or set a spinnaker in their lives. But each of them knows the Rules of Racing, can read a wind shift with the best of them, and is as fiercely competitive as anybody you would find on any big boat race course.” 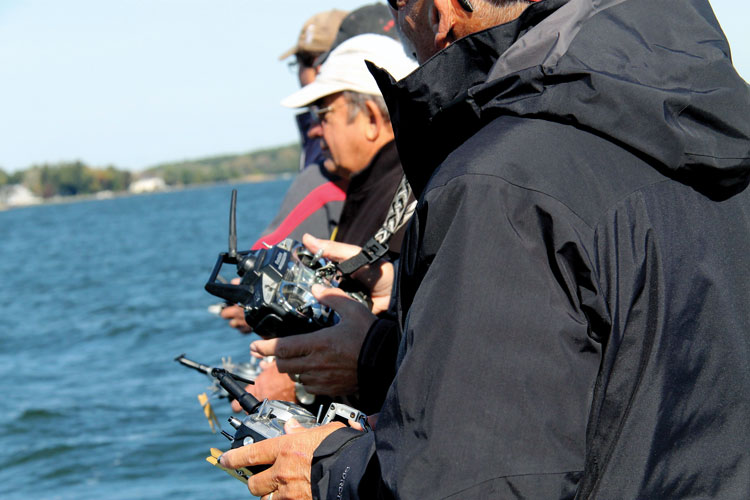 Kids take to RC racing like ducks to water, Ramos says. “It’s like a big video game. They figure out how to run the controllers in no time. Once they know the rules and the physics, they can compete with the best of them.”

Ramos knows whereof he speaks. His business,Chesapeake Performance Models (rcyachts.com), is one of the premier RC retailers on the East Coast. He has been in business for 16 years and has been sailing RC boats since he was a kid.

RC sailing is not all about who crosses the finish line first. There is a significant fun component as well.

“At any given time, there are four to five boats on the race course that could win it all. The rest of the fleet is in it for the experience and the chance to hang out with a bunch of people who share similar interests. Just like big boat racing, we have some of the most fun when the boats are ‘in the barn,’ and we’re settling back with an adult beverage recapping the day’s events.” 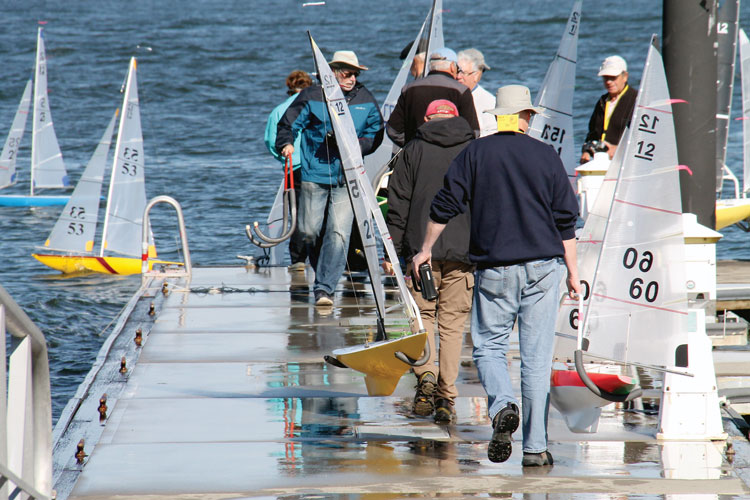 According to Ramos, there are about 250 RC sailing enthusiasts around the Chesapeake Bay. Seven fleets dominate the action, including CR-914s, East Coast 12-Meters, RC Lasers, J-boats, Star 45s, and Santa Barbaras. There even is a small fleet of Chesapeake Bay RC skipjacks that sails out of the Chesapeake Bay Maritime Museum. Several area yacht clubs have also embraced the sport, including the Tred Avon Yacht Club and the Annapolis Yacht Club.

In addition to a number of regattas held on both sides of the Bay, you will find RC sailors matching skills at Ferry Point Marina in Severna Park on the first and third Sundays of each month throughout the winter starting at 9-10 a.m. “We go until lunch time,” Ramos says, “or until the cell phones ring with our spouses wondering where we are.” 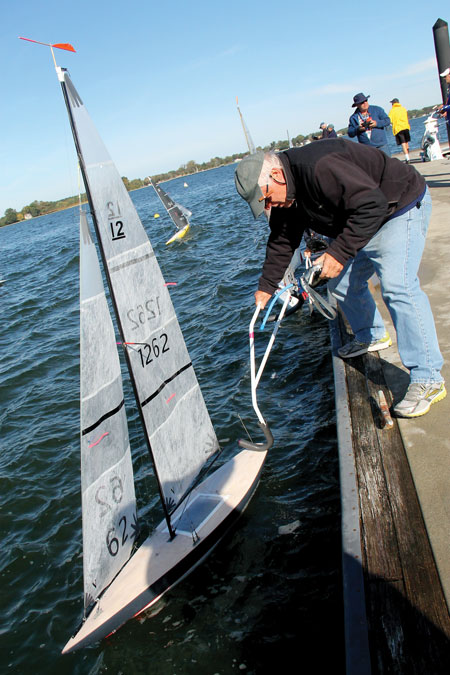 Make no mistake. These RC boats are sophisticated examples of marine engineering. The J-boat class, for example, boasts boats that measure up to eight and a half feet long and weigh between 65 and 115 pounds. The boats themselves are replicas of the J-Boats that dominated the America’s Cup series in the 1930s. The popular 12-meter class features boats that measure 59 inches long and weigh 24 pounds. About 80 percent of that weight is represented by the boat’s keel. New boats, in kit form run between $450-2500, depending on the class, number of sails, options ordered, and more.

When this reporter caught up with Ramos at the Tred Avon, he was in the midst of winning the Eastern Division 12-meter regatta for the second time. Wind conditions were challenging over the three-day regatta, with day two getting pretty much blown out with 18- to 25-knot winds. 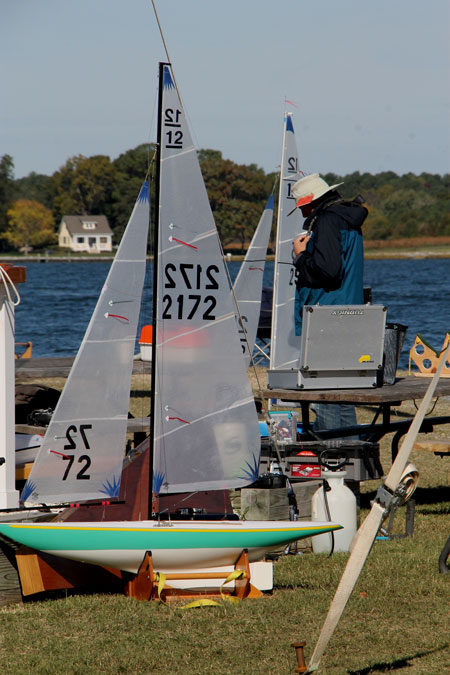 The course the competitors raced was a windward/leeward track with each leg measuring about 100 yards. The little boats had to push their way through some heavy seas (12- to 18-inch waves are the equivalent of big boats plowing through six- to eight-foot foot seas). Going down wind, the boats were in constant danger of pitch-poling. “Chaos can happen anytime,” Ramos says.

Racing RC sailboats is not a sedentary sport. As someone who almost got trampled by a thundering herd of RC sailors as they raced along the Tred Avon docks maneuvering their boats around the marks, I can attest that this can be as much a contact sport on land as it is on the water. At some regattas, RC skippers walk about six miles each day.

Chestertown’s Don Baker, who won a tightly contested heat, says RC sailing is “great because there aren’t any slip fees or crew to chase up, and the price of entry is fairly reasonable.”

Gary Weeden, owner of Paddle or Pedal in Annapolis, is working with the administrators at Quiet Waters Park to give fledgling RC sailors another venue to test their skills on the water.

Video by Ernest Freeland
Weeden recently held a demonstration day at the pond at the park where he gave passersby the chance to take the helm of one of the small fleet of T-37 Racing Sloops (37 inches long with over 600 square inches of sail area) he and a group of supporters had built over the summer. Weeden purchased the kit boats from on-line retailer Tippecanoe Boats for about $320 each.

“When I visited New York’s Central Park,” he says, “I was struck by how beautiful the RC fleet that plies the waters was. That got me thinking we could replicate that experience right here in Annapolis.”

More than 50 enthusiasts tried their hand at skippering the little boats. Even Park Superintendent Bradley Hunt got in the swing of things. “This could be a nice addition to our product offering at the park,” Hunt says. “It’s good fun for all ages and it reinforces Annapolis’s sailing heritage on a smaller scale.”

And what about the Kiwi Chris Harmer? “I finished in the top 10,” he says. “I would have liked to have done better… but it was a great time. I’ll be back.”

If you would like to learn more about radio controlled sailing, visit the website of the American Model Yachting Association at theamya.org. Or give David Ramos a call at (410) 604-3907.