How To Use Channel 16 on Your Marine Radio

The Coast Guard has designated channel 16 on the VHF-FM marine radio band as the “hailing channel”—to be reserved for contacting other vessels and for calling for help in case of an emergency. On my sailboat, we call it the “Entertainment Channel.” That isn’t a compliment to its quality programming. Unfortunately, it’s because of the improper, sometimes wrong-headed, things that come over the hailing channel when you monitor it regularly, as you’re supposed to do when you’re underway. 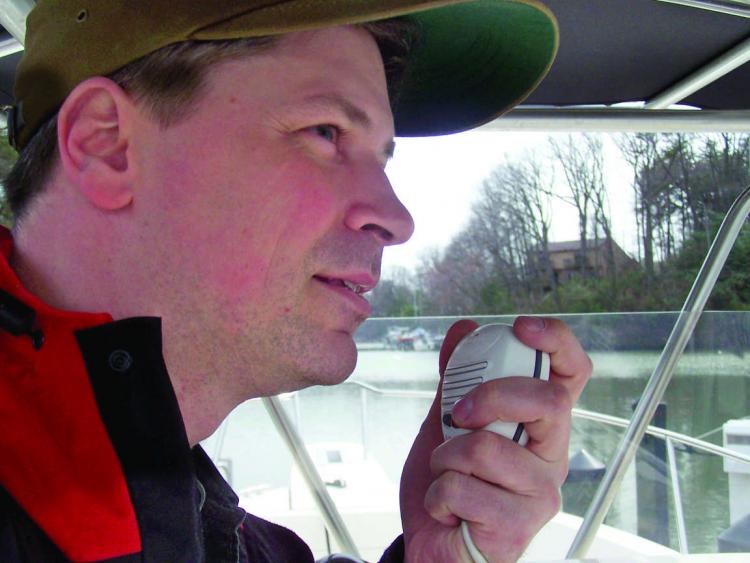 All you can do when you hear it is shake your head in despair, as stuff like this doesn’t belong there: “Hey, you bozo—you just cut in front of me! Don’t you know the Rules of the Road?” “Can anybody give me a radio check?” “Row, row, row your boat gently down the stream…” (a child’s voice).

Someone got on channel 16 last summer and started to deliver a learned lecture—presumably to surrounding boats—on a particular species of marine life. It was a full three minutes before someone on his own boat realized he was abusing the radio system and got him to stop.

You probably have spotted a few flaws in this radio traffic. None of the operators followed established procedure, such as identifying themselves and the vessel they were calling. None of them mentioned which body of water they were talking about (were they on the Patapsco River or on the Wye?). And the child singing “Row, Row, Row Your Boat” was annoying.

Those lapses pale next to the biggest problem that such transmissions pose: VHF-FM marine radios are transceivers, which means that only one vessel at a time can transmit on a particular channel. So as long as you press the “transmit” key on your microphone, you block everyone else within 20 miles or more from using that channel at all. As you have that microphone keyed, no one else—even someone whose boat is sinking or is on fire—can use channel 16 to call for help. No one else can call another vessel on that channel and expect to get a response. Even the Coast Guard can’t transmit radio messages, from handling distress calls to warning about security issues. No one can even radio the culprit to tell him that he’s blocking other people’s transmissions.

Here are some tips on how to keep such abuses to a minimum.

Don’t transmit on channel 16 unless you’re initiating a call to another boat or shore station or your vessel is in distress, so you’re calling for help—that is, your boat is sinking or on fire, or you’ve encountered a medical emergency. Even in those cases, keep your transmissions short so you don’t block other boats.

Don’t keep repeating your hailing message continuously without a break. Except in genuine distress calls, if you don’t get a response from the other party in less than 30 seconds, wait two minutes before trying again. After three failed attempts, wait 15 minutes before calling again. That keeps the channel open for others to use.

In non-emergency transmissions, don’t stay on channel 16 beyond the time it takes to make contact with the vessel you’re calling. Ask the other party to switch to a designated “working channel”—68, 69, or 72, for example—to continue the conversation. After you’ve both switched, pause a moment to make sure the channel you’ve chosen isn’t in use.

Don’t use channel 16 to berate other boaters for something they’ve done wrong. In most such calls, you can’t tell who’s making the call or even what body of water he’s on. The other captain may not even have his radio on. If you’re close enough to complain, use a loudhailer (an electric-powered megaphone) instead of a VHF-FM radio. We haven’t kept a record, but many of the boaters who cite the Rules of the Road when they vent their wave-rage over channel 16 also get them wrong. For example, the rules don’t decree that larger vessels have the right-of-way, nor do they give boaters who are operating on automatic pilot any special privileges, as some boaters have asserted recently.

Be sure you aren’t transmitting unintentionally. Keep children away from VHF-FM radios until they’re old enough to use them properly and have the training to do so. Don’t lay the microphone down where the “transmit” key might be pressed accidentally, or worse yet, get stuck in the transmit mode. Hang the mic on a designated microphone mount. Keep a close watch on everyone who uses the radio. Be sure that he or she knows how to use a radio properly. If someone on your boat presses the mic key and starts to talk about Chesapeake Bay marine life, cut him short quickly and explain the situation. (The Coast Guard often steps in to chide such boaters—but only after they’ve stopped blocking the radio.)

Don’t ask for radio checks over channel 16. The Coast Guard discourages it because it clogs up the system unnecessarily. Instead, take advantage of a free radio-check directly on channel 27, without using channel 16. Just identify your vessel and ask for a radio check. You’ll hear your own call played back to you, ensuring that your radio is working.

Learn proper radio procedures. Don’t use CB-radio expressions such as, “10-4, good buddy” or amateurish phrases such as “over and out.” That last one is just for the movies. In real life, that expression means “Now it’s your turn to talk [over], and I’m hanging up [out].” That doesn’t make much sense.

There are some other common mistakes: Boaters too often don’t identify who they are, where they are, whom they’re calling, or even what body of water they’re on. That confuses everyone, including boaters you’re trying to reach.

Too many boaters use Channel 16 to contact their marinas, yet most of them in this area no longer use channel 16. You can help keep channel 16 open by calling them on channel 9.

Moral: Channel 16 may be the “Entertainment Channel” on the Chesapeake Bay, but it shouldn’t be.

Editor’s note: For $30 or $24 if you’re a member of BoatU.S., U.S. Power Squadron, or U.S. Coast Guard Auxiliary, you can complete an online seminar (SpinSheet-tested!) about how to use a marine radio. boatus.org/marine-radio