The recreational sailing world gives us many ways to enjoy the water.

One of the basic differences in sailing craft types is the distinction between monohulls and multihulls. Many of us identify the term “multihull” with the 35- to 65-foot catamarans that have gained immense popularity in recent years with the interest and momentum in the market showing no signs of weakening. A much smaller conversation in the multihull dialogue concerns the small performance trimaran, whose direct origins can be traced back to Polynesia. 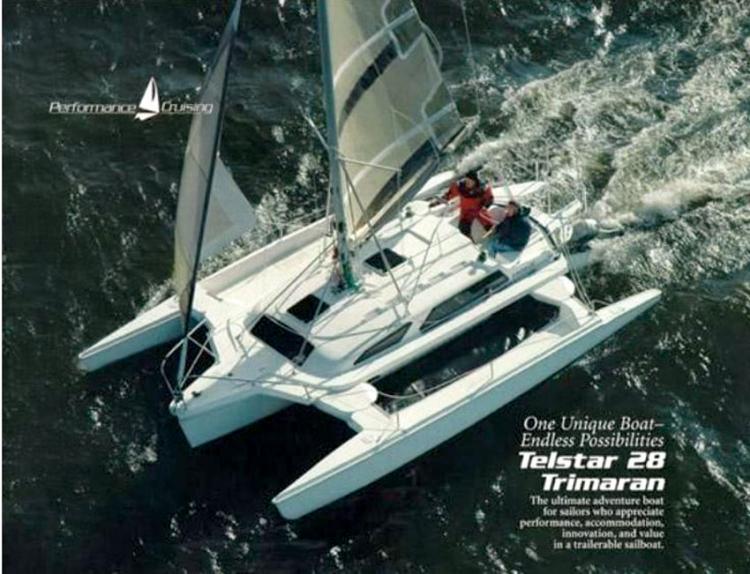 Sailors of trimarans and racing cats have an entirely different view of multihull sailing. Big catamarans essentially do not heel and provide much more living space than a monohull of comparable length. Back to trimarans; from my memory, Annapolis has been home to at least two production trimaran manufacturers over the years: Condor LTD of Eastport and Performance Cruising Inc. Condor was the builder of the Condor 40 and the Condor 30 trimarans designed by local designer Mick Price, and the Telstar 28 built by Performance Cruising Inc., also the builders of the easily recognizable Gemini line of catamarans.

The Telstar in appearance is similar to other trimarans complete with folding amas and the limited accommodations that one comes to associate with these boats. The folding of the amas is done on a horizontal plane as opposed to the vertical as seen on some other folding trimarans. The Telstar 28 is reportedly stable with the amas folded and less likely to try to broach in a heavy cross wind while tied up in the slip.

The mast-handling system is truly an engineering masterpiece, although a bit intimidating when watching the process for the first time. Raising and lowering the spar can be routinely accomplished by two people after some practice. Going from full vertical to horizontal takes a matter of minutes and requires no additional machinery or mechanical advantage such as a gin pole or crane.

The Telstar is fully trailerable with a folded beam of eight feet and six inches, which is not-so-coincidently the legal limit for highway travel without a special permit. The design displacement is 3300 pounds with the dual axel aluminum trailer weighing in at approximately 2000 pounds. As an example of true portability, a fully cruise equipped Telstar 28 was towed by a normal full-sized van from Annapolis to Bellingham, WA, sailed to Alaska, and towed back to Annapolis.

As with most trimarans of this type, vessel construction techniques are focused on weight savings. Care is taken to reinforce critical areas as needed without overbuilding other areas unnecessarily. The Telstar 28 is the first of the Performance Cruising models to utilize vacuum-infusion in the construction of the hull. Done correctly, vacuum-infusing the core and laminate allows careful monitoring of the amount of resin used, resulting in light, strong, and uniform laminates with the required strength-to-weight ratios required to keep performance acceptable and maintain durability while minimizing overall weight. Core materials used were synthetic with no balsa core in any portion of the Telstar 28 construction.

Production of the Telstar 28 was considered semi-custom with some choice in interior appointments such as galley equipment and the size of the outboard engine. Available engine horsepower ranges varied from 9.9 horsepower to 50 hp.

The Telstar 28 offered accommodations that were comparable to similar vessels at a lower sail-away price. Accommodations could be compared to that of a moderately sized camper. The boat can be towed to the water’s edge, launched, and retrieved using an average boat ramp with a standard truck or van. The vessel can be hauled by a marina Travelift in the folded position if owners and lift operators are paying attention to strap placement.

Sailing on the Telstar 28 has always been a pleasant surprise. When July and August give us multiple days of “light and variable,” the fully battened main, roller furler genoa, and screecher can provide exhilarating sailing in a variety of wind conditions. My last sea-trial was in early August with little or no wind showing on the anemometer. After 20 minutes a slight breeze filled in and was all that was needed to not just move through the water but actually turn it into an exhilarating sail and overall fun outing. The retractable centerboard gives both stability and tracking when sailing and the ability to go into ultimate shoal-draft mode allowing entry into almost any body of water short of a mud puddle.