Connecting With Other Kid Boats

How Does One Kid Boat Find Another?

Cruising kid boats used to be few and far between. Kids afloat were often left going long stretches with just Mom, Dad, and siblings. Today more and more families are out on the Chesapeake Bay and around the globe sailing together. So, how does one kid boat find another kid boat? 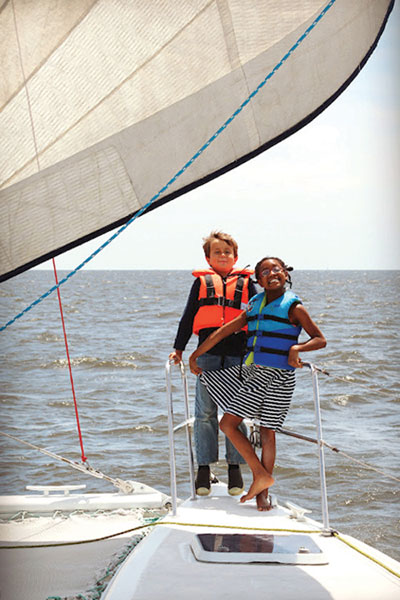 Behan Gifford is the author of “Voyaging With Kids: A Guide To Family Life Afloat.” She’s been seeking out other families afloat for 11 years. Her own family of five circumnavigated starting when the children were four, six, and eight years old. From tots to teens, Behan knows the key to staying connected to other kid boats. “Parents don’t always appreciate at first that finding other kid boats can’t be left to chance. It takes effort on their part and flexibility in routing. Fortunately, there is a wealth of resources to help kid boats find each other.” 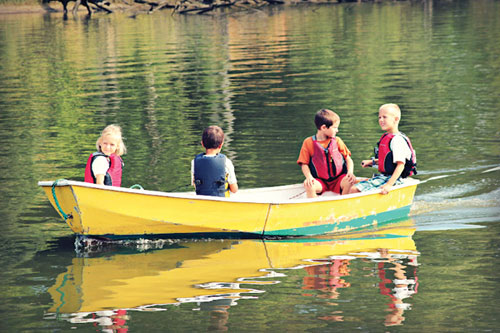 If you show up to an anchorage or marina cold turkey, there are some telltale signs that a neighboring boat has children onboard. Little clothes drying out on the lifelines, a swing hanging from the rigging, or a pile of toys on deck are all good indications. On shore, families will congregate at parks, ice cream shops, and beaches. Little ones need to burn off steam, and getting off the boat becomes more of a daily priority.

Finding kid boats is more sophisticated than dinghying around looking for tiny life jackets. There are loads of online groups for sailing kids now on social media. Kids4Sail is a large group on Facebook where boat families connect all over the world. Usually families give a shout out when they are on their way to a port, and other families going the same way or already there chime in. That way parents know exactly where to find kids of a similar age or going the same way, and they can swap tips about where to find the best ice cream shops and parks. The group even designed a burgee, so even unplugged and on the fly, kid boats can spot one another. And the group has sub-groups for different regions such as the Chesapeake Bay and East Coast, Pacific Puddle Jump, and so on.

Teen boats can be a different story. There won’t be tiny PFDs or toys scattered on deck when a boat has teens onboard. And yet, teens need the social time as much or even more as the little ones. Connecting online can be a sanity saver when it comes to finding teens sailing around with their parents.

However it happens, it’s critical for kid boats and teen boats to find each other and make connections that turn into friendships. “Family togetherness is a great benefit of cruising, but ultimately, kids also need other kids to hang out with,” says Gifford. “The older they are, the more important it is. Families who are able to adapt their plans are the most successful at making this work.” 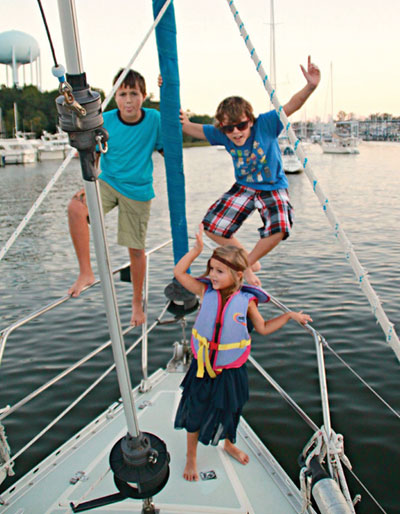 This is where buddy boating comes in. Plans are fabulous, but sometimes you need to ditch your next port and follow the tribe to keep the kids with the pack. We met up with some kid boats from Europe a few summers back in the West River. They scrapped their original plans and followed us back to Annapolis so that all of our tween boys could bond. And boy did they ever bond. Sleepovers, Nerf gun wars, outings, and cookouts happened all summer long. The boats all parted ways, but the friendships stayed strong, even leading us to visit them in Europe a couple of years later. It all started with a post in a kids group on Facebook and developed because the boats involved were all willing to change course to keep the kids together.

Once the kids are together, it’s not only fun, but it can be beneficial to the adults involved as well. Knowing there are other kid boats around often motivates boat-schooled kids to wake up early and finish their school work so they can meet up and play. Kids can hang with other families when big boat projects unfold. And fellow kid boats might be willing to swap sleepover nights, giving the parents onboard a rare and treasured kid free night to... catch up on chores. And of course the grownups get to hang out and do grownup things while the kids are doing their thing. Adult conversation and cocktails are a gift when your little ones are quietly and happily playing with other young people.

Connecting with kid boats should be just as much a priority as provisioning and passage planning. Otherwise, you might get little mutineers, and that’s never a good thing.

Story and photos by Cindy Wallach