A Dismasting at Sea Part 2 with Video

Richard got out the Satellite phone, and we contacted our ground support/engineer consultant, Jim Kevern back in Annapolis. We needed to inform someone that we’d been damaged, but were safe, confer about the weather forecast, and confirm the details of our situation.

Jim contacted the U.S. Coast Guard. We had a three-way conversation and confirmed those decisions. He also contacted Bermuda Marine Services and forwarded the Float Plan we had sent to him prior to our departure so they were abreast of all the details of boat, crew, and emergency contacts. Although they all recognized our situation and agreed to monitor our progress, they would not help unless our lives were in jeopardy and we were willing to be airlifted off the vessel, leaving Molto Bene to flounder in the ocean or be scuttled. After establishing a time to communicate with all parties later, we motored toward Bermuda through the night.

Molto Bene has had a glorious life as a race boat. She has been quite successful at both round-the-buoys as well as five ocean races. We’ve also participated in a Caribbean 1500 trip to the islands and a Salty Dawg Rally. These organized events want to ensure the highest degree of safety and require each vessel to have a long list of operational safety gear and storm sails. Much of that safety gear is reliant on the mast, including navigational lights, wind data for the instruments, and antennae for many communication options.

Besides the sat phone, we have an SSB radio whose antenna is an integral part of the back stay and a VHF radio whose antenna is at the top of the mast. We also have a back-up hand-held VHF. At one point, we issued a “pan-pan” on the hand-held. However, VHF radios only transmit as far as line of sight. I’m pretty sure no one heard that “pan-pan.”  Having that antenna 63 feet above the water considerably increases its range plus it has an output of 25 watts. The hand held VHF radio, has a much more limited range and only a maximum output of 5 watts.

If we did need assistance, it might be rendered by a passing ship, but with limited radio range, our chances of being heard might be pretty low. One of those race safety requirements was an emergency antenna on the stern rail. It’s obviously much lower, but it increases the output to 25 watts, increasing our chances of calling for help and when the time came, calling Bermuda Radio sooner.

At first light, Richard and Jeff were busy devising a “mast” out of the carbon fiber spinnaker pole we’d saved. A boat is always under improvements, and Molto Bene is no exception, so Richard had bits of wood hidden under bunks for projects he had in mind. He also has a Japanese saw on board. He constructed a mast “step” to secure the butt of the spinnaker pole just behind the stump of the mast and protect the deck. We used what was left of several severed lines and the check stays became the shrouds, the main sheet became the forestay and the two reef lines became the two halyards.

Molto Bene is a 1985 vintage sailboat and has 12 winches. Eight are on the cabin top, four by the companionway, and four by the mast. She also has heavy-duty, anodized aluminum toe rails with cut-outs so that you can attach blocks anywhere. We led each “shroud” to a block on the toe rail, and then to a winch to tension them securely. The “forestay” went forward to a block at the bow, and then back to one of those winches also. This configuration remained rock solid for the next two days.

Another benefit of all those race safety requirements was storm sails. Although we didn’t expect any storm activity until Friday and hoped to arrive in Bermuda before those storms, we dug out the storm trysail and storm jib to see how they might work with our new 16.5-foot mast.

Storm jibs are cut differently than normal jibs. The clew is much higher—almost even with the middle of the luff. The hoist on the storm jib is 22 feet, but once hoisted, the clew ended up almost directly out from the new tack at the bottom of the new “mast.” We led the jib sheet through a block on the toe rail and trimmed it for the wind angle which was a starboard reach. By adding just this little bit of sail, it may have helped stabilize the boat some and it added maybe a knot of speed, extending our fuel just enough.

In any situation there’s no substitute for being prepared with tools, spare parts, and know-how and making good decisions. There’s also some bit of luck, be it good or bad. In this case, we were happy to take advantage of a bit of good luck. The wind calmed some, the waves lessened and were at a better angle; all contributed to improving our chances of making it back to Bermuda.

We continued with this configuration for about a day and a half, until Wednesday evening when we started getting into some squalls with rain and lightening. The wind was building and shifting, so we decided to take our sail down and save it for another day. But by this time, we figured we had gained enough advantage from our little mast and sail to be able to motor the remaining distance. We arrived safely in Bermuda on Thursday, December 15, 2016 at 0630 EST with 12 gallons of fuel to spare! 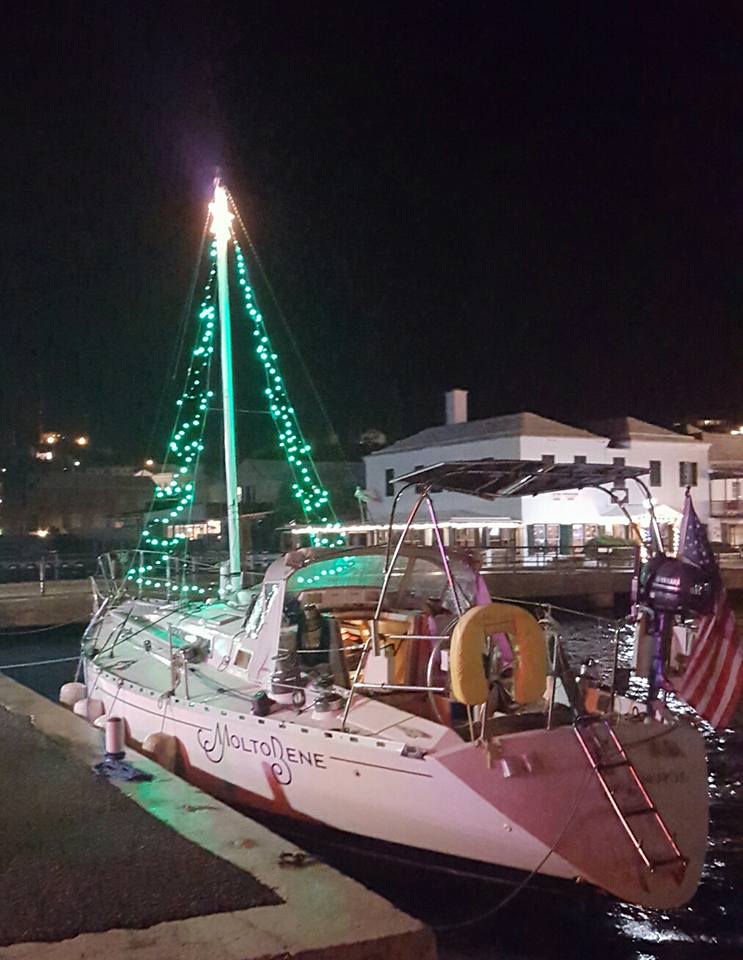 Once we cleared customs, begging for the maximum time to remain in the country not knowing how long we’d be there, we tied up at Bermuda Yacht Services just next door in St. Georges. Richard proceeded to get out Christmas lights. Jeff said, “Really? We just lost the mast and limped 300 miles, and you’re going to put up Christmas lights?” Why not? We were not our usual 60-foot tree, but with a little alteration, we managed a 16.5-foot Christmas tree! Including the star!!

The way we saw it, we had two options. One was to find some kind of mast to make a better jury rig, load up with 150 gallons of fuel (where would we put that much fuel?) and try to make it to the U.S. for repairs. Although Bermuda has lots to offer, it is sorely lacking in resources. Everything gets shipped in.

However, being in the hurricane belt, it has no shortage of salvaged parts from boats damaged in storms. We could probably make something work. Someone even mentioned dumpster diving at the dockyard; maybe we could find some carbon fiber throw off from one of the America’s Cup boats? More carefully considered though, we realized this would involve dodging winter storms, crossing the gulfstream, and wallowing weirdly with the weight of all that fuel and not a proper mast.

The other option was to order a new mast and have it shipped to Bermuda along with all the other bits and pieces.

We are now waiting (not so patiently) the six to eight weeks (or more) it will take to construct a mast. We’re researching replacement options for halyards, sheets, reefs, furlers, life lines, stanchions, etc, etc, as well as shipping options for everything. Then once it all gets to Bermuda, we’ll have to find a yard to put it all together that has deep enough water for our 7’3” draught and can get a crane in to put it in place. Meanwhile we’ll be working through all the details with our insurance company.

One of the most awesome aspects of this whole experience was the kindness and generosity of fellow sailors, friends, friends of friends, and strangers. People offered us places to stay, an unlocked phone so we could communicate in Bermuda, help of every kind, including joining complete strangers for an “orphans’” Christmas dinner. It renewed our faith in mankind. We’ll do our best to pay it forward…

It’s not exactly how and where we intended to spend our winter, but it’s another story to tell!