The History of the Ghost Fleet of Mallows Bay 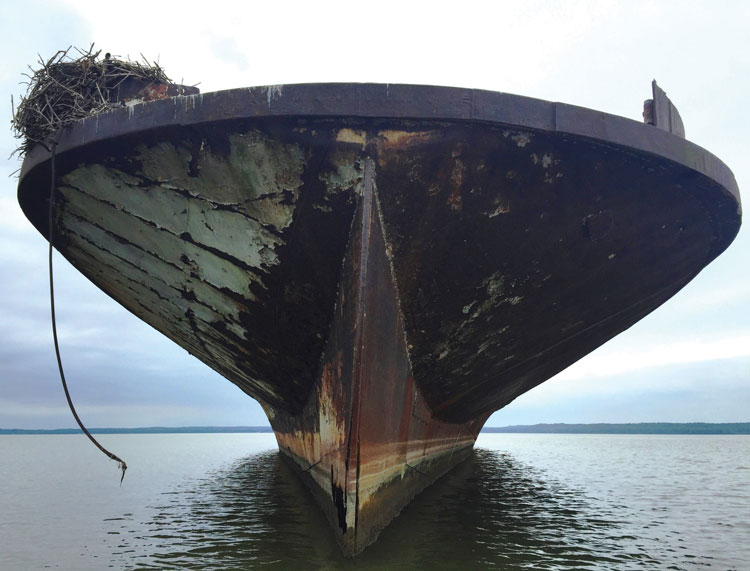 Forty miles south of Washington, DC, off of Maryland’s Charles County shoreline near a little town named Nanjemoy, the weather- and water-beaten remains of more than two hundred ships lie in their final resting places in the shallow waters of the Potomac River’s Mallows Bay. “Mallows Bay is the richest marine heritage site in the United States,” according to Samuel Orlando, Chesapeake Bay Regional Coordinator at the National Oceanographic and Atmospheric Administration’s (NOAA) office of National Maritime Sanctuaries. “In addition to being reflective of America’s emergence as a naval superpower during World War I, the Ghost Fleet provides the structure for a unique marine ecosystem.”

In November of 2015, the emergent and submerged vessels of this Ghost Fleet, the largest shipwrecked fleet in the Western Hemisphere, were nominated as a candidate to become part of a national “underwater park” system of 13 national marine sanctuaries which encompasses more than 620,000 square miles of marine and Great Lakes waters. NOAA’s National Marine Sanctuary System protects unique water habitats and is home to diverse aquatic ecosystems ranging from kelp forests to coral reefs to the playgrounds of humpback whales. Pending the results of current public outreach soliciting input on four alternatives, the Mallows Bay-Potomac River Sanctuary would become the 14th National Marine Sanctuary under NOAA’s care. 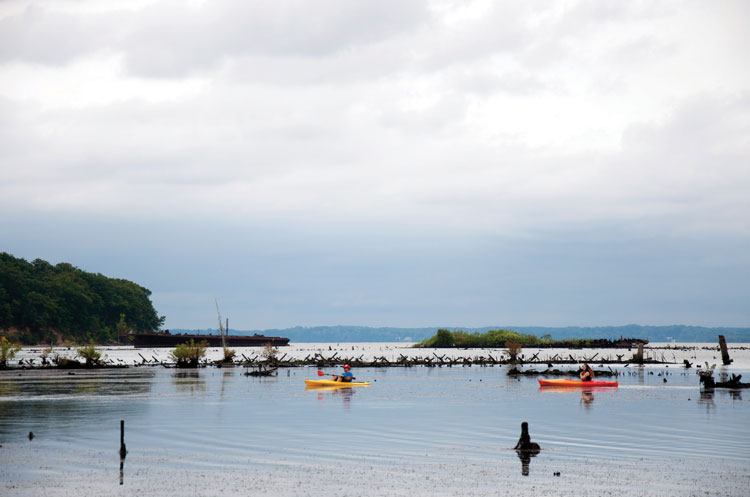 If you’re concerned that there was a Battle of Mallows Bay on American soil during WWI that sunk hundreds of ships, and that you’ve somehow gravely overlooked a key event in U.S. history, fret not. The origins of the Ghost Fleet may have its roots in America’s burgeoning war effort, but it was largely the industrial complex and economy that grew out of World War I that led to the fleet’s demise.

One hundred years ago this month, President Woodrow Wilson signed off on what was at that time the greatest shipbuilding program in U.S. history by approving an order for 1000 300-foot-long steamships that were to be sailed across the Atlantic as troop supply transports. The 1000 ships were to be built in only 18 months. Each would cost from $700,000 to $1 million to build. The shipbuilding was to take place across nearly 90 shipyards, and the ships were to be constructed of wood instead of steel, saving shipbuilders time and money and reserving U.S. steel for vessels engaged in combat operations.

Production did not occur on schedule. By October 1918, only 134 ships had been built, with 260 partially completed. For those of you who know your history, the Armistice of Compiègne was signed on November 11, 1918. Germany surrendered, and the war was over. None of Wilson’s transport ships had crossed the Atlantic. 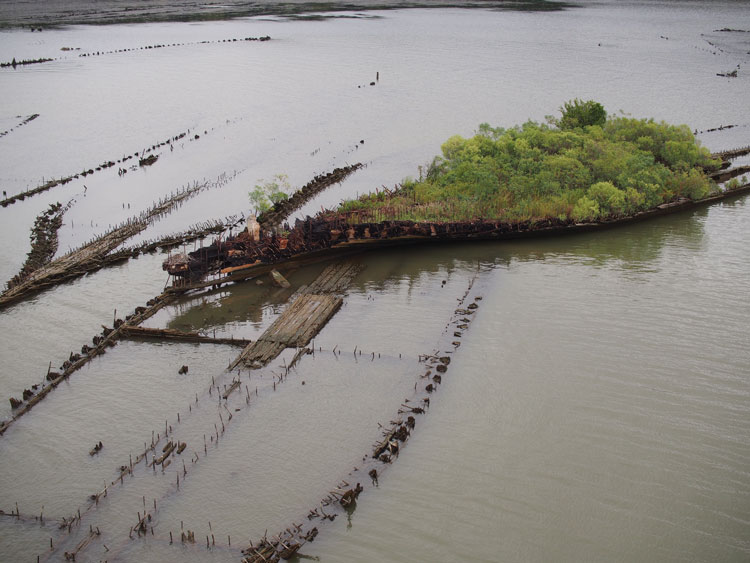 The steamship fleet project continued despite the war’s end, but by September 1919, only 264 ships had been constructed. The vessel’s shelf life looked bleak. The industrial revolution was bringing diesel engines aboard for propulsion; coal-burning vessels became obsolete. Wilson’s steamships had been built at such a rapid pace that construction was frequently shoddy. Finally, the shipbuilding industry had moved to steel over wood. Wilson’s fleet had no purpose.

In 1922, the Western Marine and Salvage Company (WMSC) purchased 233 of the ships for $750,000. WMSC towed the un-purposed fleet to Widewater, VA, (just south of Quantico) for shipbreaking, planning to salvage usable materials, burn what remained, sink the ships’ hulls into Widewater marshland, and cover them with river dredging. Protests from Widewater watermen and community members about the “salvage process” soon resulted in WMSC buying nearly 600 acres across the river in Mallows Bay and moving their operations to Maryland. 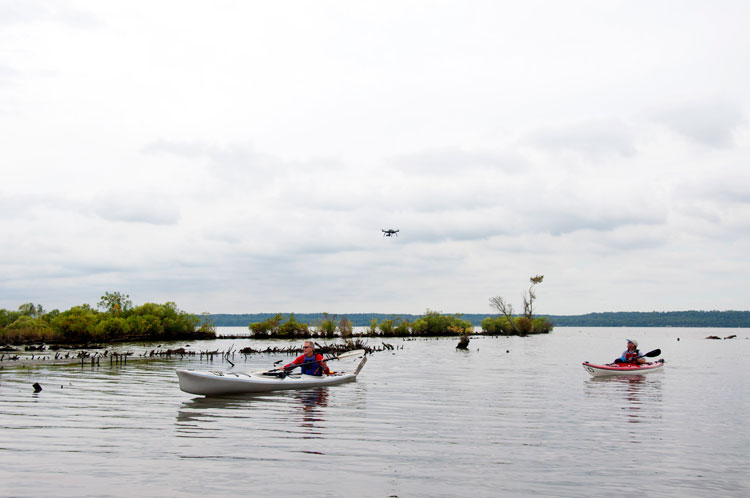 Fast forward 40 years to 1970, when a representative from the Audubon Society testified that the Ghost Fleet had become an “integral part of the [Mallows Bay] ecosystem.” Forward again to the ‘90s, when researchers given a grant to inventory the economic, historical, and archaeological aspects of the salvage site found that Western Marine had left many more vessels in Mallows—to include 12 barges, a Revolutionary War-era longboat, and several 18th century schooners. Finally, in 2002, the Trust for Public Land protected the 510-acre Mallows Bay property for the state of Maryland. The Ghost Fleet had become a haven for marine life, supporting a complex underwater ecosystem.

Although some Mallows Bay watermen have not welcomed the potential “sanctuary” designation, the establishment of a Mallows Bay-Potomac River Sanctuary will, according to Orlando, not only protect the bay’s natural and cultural resources, but will also support increased recreational access, enhance publicly accessible shoreline, and foster an increase in currently existing recreational resources. Orlando has become an expert on the large-scale potential benefits of a Mallows Bay Sanctuary and relayed that the sanctuary would incorporate on-the-water passage markers for recreational kayakers and canoers and would add a fourth water trail to the Potomac’s existing three.

Natural and cultural resources would be protected. “NOAA will be able to track sediment and ecosystem elements, protect the wrecks, and support marine habitats and healthier populations,” said Orlando. Enhanced awareness of the area has led to support for a new monitoring buoy which will provide active weather and water data for local watermen and will feature Passive Acoustic Monitoring (PAM) of marine life and anthropogenic activity. 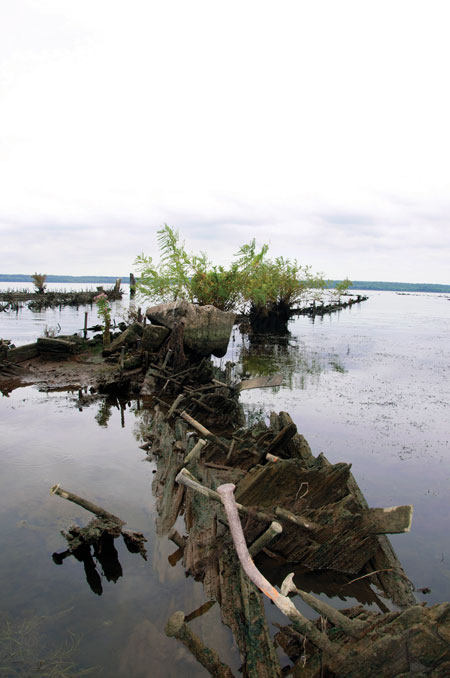 The largest benefits of a sanctuary designation are predicted to result from the partnerships, public interest, and volunteer efforts that are on the rise to research and help maintain the Mallows Bay ecosystem. “There is a catalyst effect on public care for the area’s resources,” said Orlando. “Community volunteers, Boy Scout and Girl Scout [groups], new projects from public schools, and research ideas coming from across the country” are a direct result of raising visibility of the ecosystem and its archeological treasures.

The public comment period on whether Mallows Bay should become a sanctuary and the determination of the sanctuary’s geographic footprint closed on March 31. According to Orlando, it will take approximately one year before NOAA can evaluate all stakeholder inputs and finalize a site designation.