A Hoosier on the Chesapeake Part 1

A Hoosier’s sea story... My first glimpse of the Chesapeake came at dawn on a clear morning in late July as my crew and I dead reckoned in from the Atlantic with batteries too low to run the GPS chart plotter or start the engine. It turns out that the mouth of the Chesapeake is right where the paper charts show it to be. It also turns out that good adventures usually start with mistakes. My mistake was failing to isolate the engine starting battery, two days before, as I charged the batteries. 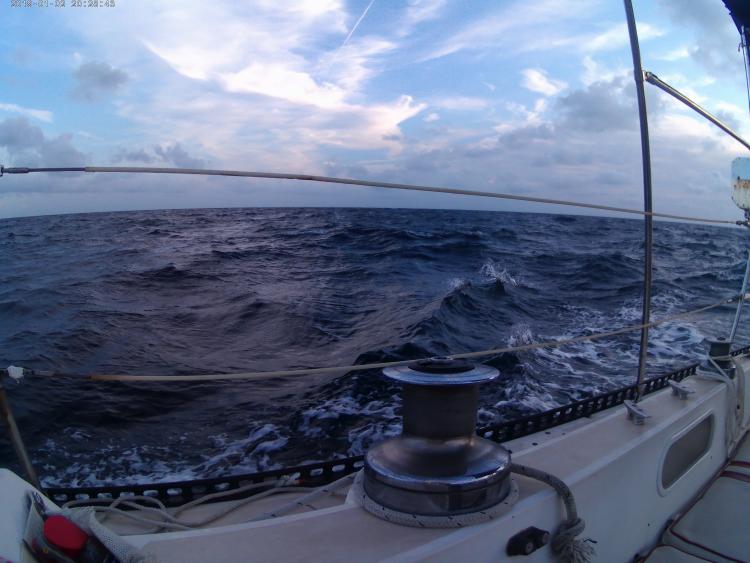 It had been a downhill ride all the way from Savannah with south and southwest winds pushing us along at a good pace. We rounded Cape Hatteras just after midnight in 30-knot winds and six-foot seas that filled our cockpit with warm water and little fish. There were thunderstorms all over the horizon. They missed us.

Euphoria raced along with a bone in her teeth under a reefed main and no headsail. We turned due north on a beam reach for Cape Henry and the mouth of the Chesapeake. Hood went below and poured some rum in a coffee cup. We both took a swig and gave one over the side to Poseidon.

By noon of the following day, it seemed impossible that we could be on the same body of water. The seas were flat calm. Thousands of jellyfish swam in the clear waters. Huge turtles did their best to eat them all.

Sixty miles north of Diamond Shoals, stuck in the calm, I attempted to start the engine and motor-sail for a while to change the batteries and make fresh water. I went below to switch the battery isolator to the engine starting battery. When I did, I learned I had forgotten to isolate the battery after the last time I ran the engine. It was dead. The house batteries were low-low. This was a problem. 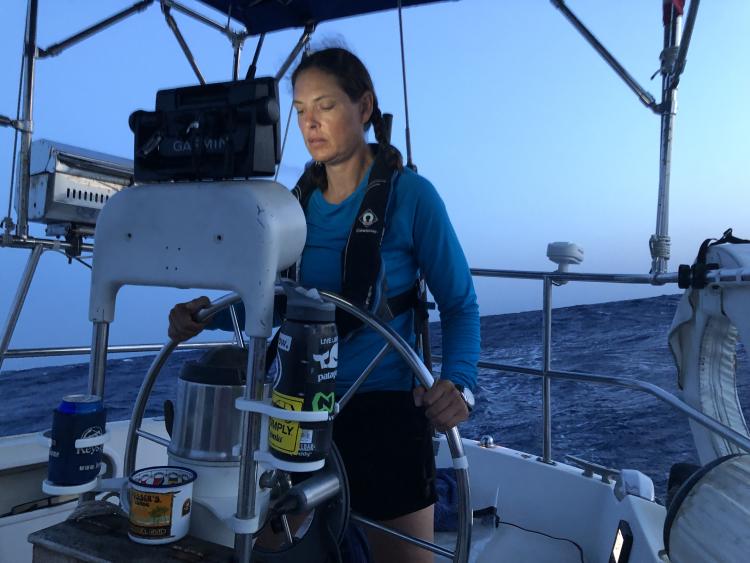 I must stop here and introduce my crew. She is new to sailing. Before Hood took up the sport, or addiction if you choose, she was an experienced water person. She had canoed some of the world’s most challenging rivers and fiords and taught others to do the same. Hood bought a little twenty-one-foot Venture-McGregor with the intention of spending her summer break learning to sail on Kentucky Lake. Hood is a southern Indiana high school Biology teacher.

She asked my cousin, Todd to help her learn to sail. They had a fine sail on her first day out. They, of course, had engine trouble but managed to sail away from the dock, around Lake Barkley, and back to the dock. They got the boat back on the trailer without the engine. They were proud of their sailing. It was a good day.

As she pulled the trailer up the ramp and into the parking lot, she forgot about the mast. The overhead powerline did not.

The forestay gave way. The mast came down. There was damage.

Todd called me to relate the story and asked if I had another mast she could use. I told him I did not, but if sailing was what she wanted, she could join me in Fort Pierce, Florida, and sail up the coast. We had never met. She showed up a couple of days later carrying a bottle of good rum. Hood is welcome aboard anytime. 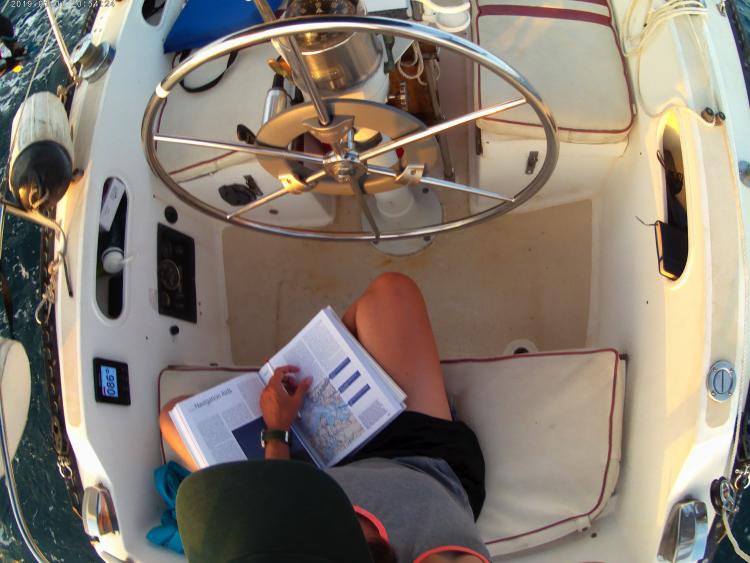 We sailed up from Florida with a plan to end the trip, before she returned to teach school, with a Painkiller or two from Pusser’s in Annapolis. Instead, we shut down everything that drew a watt of electricity to save juice for our navigation lights and marine band radio. We shut down the freshwater pump and used the emergency jugs. They had grown a nice culture of green algae. It did not make bad coffee. It made terrible lemonade.

We bobbed along with no wind for hours. Finally, a little breeze tickled the water, lifted the genoa, and pushed us along on a slow reach north. When night fell, we kept a lookout for ships entering and leaving the Chesapeake. With no functioning electronic navigation gear, we reverted to dead reckoning. She got to learn to do it the way the old timers did.

We navigated around the shipping lanes in the dark and over the Chesapeake Bay Bridge Tunnel at five in the morning. We sailed, sometimes at less than two knots, up the Chesapeake and into Mobjack Bay. We set the anchor in the East River in front of Mobjack, Virginia. Five days and four nights of sailing. Hood learned to sleep in less than four-hour spells. We sailed through rough weather and dead calms. It was beautiful.

We took the dinghy to shore to find a store or a ride into town. A young man had his firefighting turnout gear on the toolbox of his pickup truck. I asked him about volunteer firefighting. He asked me about sailing. Then he asked if he could help us. 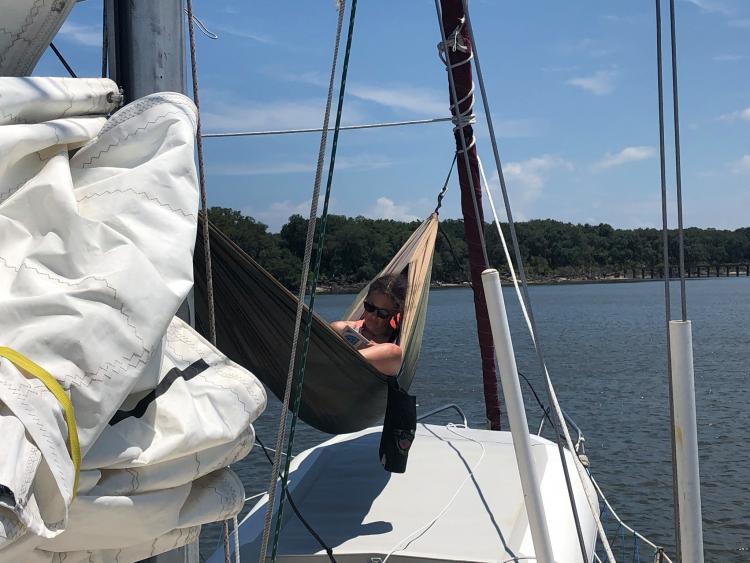 He went out with me to Euphoria. We pulled out the starting battery and dinghied it to the docks at Compass Marina. The young man carried the heavy starter battery about an eighth of a mile from the little marina to his grandparents’ house.

He put it on a charger. His grandfather gave me a twenty-four-ounce beer. He must have known I could use one. His grandmother gave Hood her shower to use and took her to town for ice and stores.

The grandfather spoke in a slow and stately Virginia drawl. He told me stories. I drank his beer. He drank wine. His grandson fussed over the battery. The grandmother sat down to talk with us.

They told us how they met. He was a widower and had become a recluse. She was a widow and had moved into the house beside him. When he saw the semi-truck come down their lane with her furnishings, he said to himself, “That woman has more money than sense.” After a little more than a year they were introduced.

Her water quit working. Her landlord told her to go next door and that the man next door knew how to fix her well pump. She knocked. He opened the door and said, “And just what the hell do you want?” She told him. He closed the door in her face. She did not know whether to stay on his porch or turn around and go home. Not to be treated so unpleasantly without letting him know it, she knocked again. He opened the door and said, “Are you going to keep bothering me or are you going to let me fix it?” He closed the door again in her face.

She stormed off and went home. Later, she checked the water. It worked. She came back over to thank him and to show him how genteel people are supposed to behave. She knocked again. He opened the door and said, “You again? Now what?” She told him, “Thank you.” He asked if she wanted to see his koi garden. He showed her a ten-thousand-dollar fish he had bought in Japan. She said to herself, “This man has more money than sense.”

A couple of months later, they walked next door and got married in the old Methodist church. They went to Ireland for their honeymoon. He had a small stroke. Their one-week Irish honeymoon turned into seven because the doctors would not allow him to fly. Five years later, they say they are still honeymooning.

He graduated from Virginia Military Institute, served in Korea, and owns a successful nursery. She owns his heart.

As we left, he asked me, “Before you go, you must tell me what kind of a man you are. Are you a Republican or a Democrat?”

I told him I served in public office as a Democrat. He said he guessed that it takes all kinds. I told him I could remember when you could not find a Republican in Virginia. He smiled and we shook hands. I hope to see him again.

We went back to Euphoria, mounted the battery, and fired up the engine. We swam past dark in the brackish waters with cold drinks as the engine alternator charged the batteries.

The next morning, the church bell from the little Methodist church rang across the water. Hood took charge. She planned our navigation, performed a pre-trip inspection on the diesel engine and boat systems, and motored us out into the Chesapeake. She made sure the battery was isolated. I made sure I mixed a light, medicinal drink for I worked on a hangover.