Last Sailing Trip of the Season

It’s that time of year again, when the last sailing trip of the season has taken place or is close at hand. The snowbirds have headed down the Bay to the Intracoastal Waterway and points south. The days are shortening toward winter. The air is crisper and the shadows long, but the sunlight of the late afternoon brings out the brilliant reds, yellows, and orange of the trees waving in the wind along the shore. Ah yes, the wind! What a wonderful time to take that last cruise of the year. 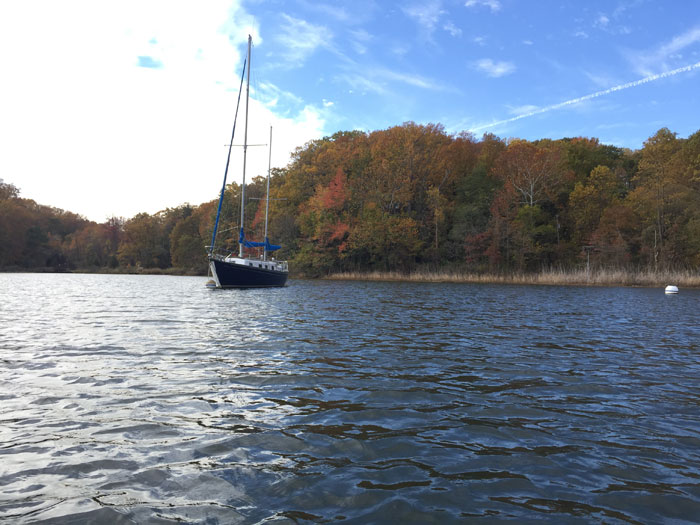 The last trip, whether it be a week-long cruise or a three-hour daysail, is always one of bittersweet reflection and joyful exclamation. How lucky we are here on the Chesapeake to have a season lasting from April to November for most years and March to December for some others. A luckier (or perhaps crazier) handful of hardy old salts, if presented with the mild, ice-free conditions of some winters, won’t have to call it quits for the season at all.

Normally, crowded waters have thinned out appreciably by mid-October, but so have shoreside amenities so plentiful in the summer. Dock bars are quiet and subdued; Tiki bars are closed up and silent. Marina pools have been drained and dry for a month or more. It is the hardy soul indeed who, being strong of character and mind, slips his lines and takes to the Bay on a cruise just as it begins its long winter slumber.

Trepidation
Not possessing any of these attributes, I decided to sail north to Havre de Grace, MD, on an unusually warm November weekend a couple of years ago. The thought was I’d have the whole Upper Bay to myself, highlighted by a restful stay at an accommodating marina, without the hubbub of the high season messing with my solitude. Best of all, 10 to 15 knots of breeze were forecast from a favorable direction, with gusts to 20.

What a mistake this turned out to be. The wind died about 10  minutes after I set the sails coming out of Middle River. Cursing NOAA, I motored for hours into a nasty chop past the bucolic but prohibited shoreline of the Aberdeen Proving Ground (APG), then another hour-long slog up the approach channel to the city. I saw only a smattering of other boats all day, only two of which were sailboats. With the sun going down in tune with the temperature, I called up the marina on the radio and asked for my slip assignment, but it was just about closing time. Nobody would be around to help me in, which didn’t worry me much. But the place was absolutely deserted.

Comeuppance
I had more solitude than I knew what to do with. But it wasn’t the solitude Thoreau romanticized. Most of the hauling out had been done, so a walk to the marina office was through a maze of jackstanded boats, with not a soul in sight. The town was fairly sleepy, too. I found a restaurant bar with an acoustic string band, but conversation was not to be had. So much for me as the great singlehander. After a single day, I craved the company of others ashore, only to skulk back to the boat disappointed and lonely on a cool November night. How pathetic.

The air temperature was in the 30s when I went up on deck at 4:30 a.m. to secure a slapping burgee in a freshening breeze. It had been hard to sleep anyhow, with regular Amtrak trains rumbling overhead and creepy APG sirens piercing the night air.

When I finally awoke, I was raring to go. Home that is. Originally, I was going to stick around another day, but NOAA again promised wind, five to 10 knots this time, but enough to sail away from this apparent despondence that was really my own. I’m sure Havre de Grace is a nice place to visit, and I’ll come back another time and give it another chance. But a 60-mile trip with no sailing to speak of just seems wrong. I wanted to sail while the opportunity presented itself. Just as I was making final preparations for departure, NOAA downgraded the forecast to five knots. I wanted to cry. Another six and a half hours of motoring would drive me mad. Bliss
But it turned out not so bad after all. The Bay became mirror calm. The colors were brilliant, the sky azure blue, the air crisp. I took in the sights, smells, and sounds. It had been a good sailing season, even if the last trip was not. There are worse places to be, and inside my own head was one of them, I told myself. As the boat lumbered toward home, I shut out the bad and replayed all the good sailing days and nights I’d enjoyed all year. I pulled into the slip for the last time after sunset, and it was cold again. But I felt warm inside, happy even. It had been a good year indeed. And all things considered, not such a bad way to end it.

originally published in the October 2012 edition of SpinSheet