Living the Cat Life--It's the same, only different...

The basics of sailing are pretty universal, but each boat and rig style and hull shape can bring with it different approaches to the mechanics of sailing. This is especially true when switching from monohull sailing to multihull sailing. It’s the same, only different. 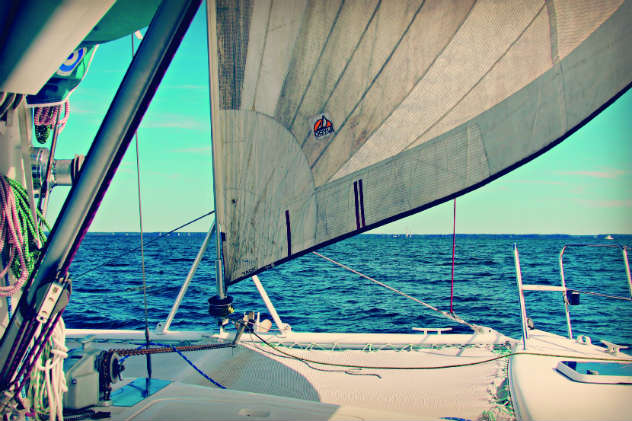 The Feel
The first thing sailors usually notice when they switch from a cruising monohull to a cruising catamaran is that the cats have less “feel” to them. Of course, there is no heeling on a cruising multihull, and less feedback through the helm, too. On a cat you sail more by the apparent wind numbers. This means you need to mind your wind and probably reef earlier than your mono friends. Instead of heeling in wind gusts, catamarans accelerate.

The best feeling is the feeling of sailing fast and smooth on the level. Yes, we still move up and down the waves, though more on top of them like a cork. And here on the Chesapeake Bay the shallow chop and powerboat wakes will make cats flop around as much as a monohull, but we regain our center quickly. When we’re out at sea, we are not leaning over for days at a time. This isn’t just nice for your cocktails, it’s also less fatigue for the crew who doesn’t have to physically strain to walk around the boat, use the head, or work in the galley. Now that’s a good feeling! 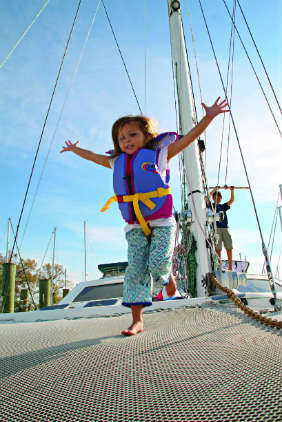 Sails and Sailing
Catamarans typically will have a large, powerful, full roach mainsail. This means that in higher winds with just the main up you will be weather vaning into the wind and find it almost impossible to fall off without the foresail to counterbalance the mainsail. Because of this, you’ll almost never see in-mast furling for catamarans, but they can use roller boom furling for the mainsail.

The sail material itself can be anything, but often the loads will be more on the sails, sheets, and rigging because the boat doesn’t heel over to spill the wind when overpowered.

The full mainsail can also create a wind shadow as you start to sail further downwind, but the plus is that flying a spinnaker is extremely simple. The beam and distance between the bows means that you don’t need a spinnaker pole; simply hoist, and you’re off. A screecher on a bowsprit can offer the downwind performance and get around the wind shadow of the main. These downwind sails are the ones that give the boats the double-digit hull speeds.

Tacking a cat can be a less-than-graceful maneuver if you’re not used to how cats perform. A catamaran isn’t a J-boat that turns on a dime. It’s best to sheet in the genoa or jib, getting as much power as possible to move you around, and then move the helm decisively when the foresail flogs.

On the main, it’s a good idea to make sure that the mainsheet handling is well-functioning. Having 700 square feet of main up and trying to fall off when your traveller is stuck isn’t a pretty picture. You also want a boom preventer or line to stop accidental gybes, just as you would with any boat. 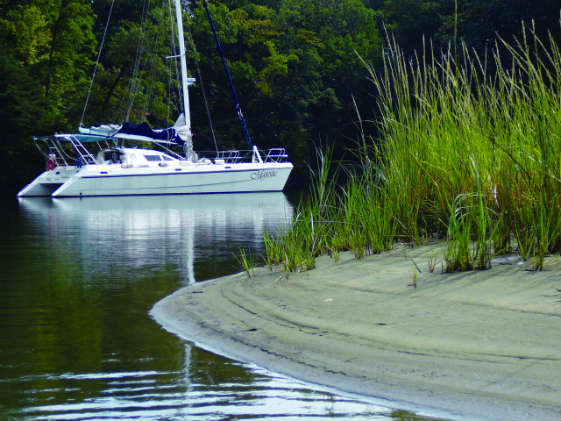 The Need for Speed
Cruisers who say they don’t care about boat speed are lying. We all care, racers and cruisers alike, and that’s one of the joys of catamaran sailing... on a good day.

In light winds, most monohulls with less wetted area will sail faster than most catamarans. Also a heavy production boat with all the bells and whistles and luxuries of life will not be a fast sailing boat unless it has a lot of sail area and a decent wind. With a proper amount of wind and proper sails, a catamaran can achieve and maintain double digit speeds easily, speeds that most monohulls couldn’t achieve unless on the back of a trailer. But don’t expect to be flying past your monohull pals on every point of sail.

Gentlemen Sailors
The old saying goes, “a gentleman never sails to windward.” I guess we’re all gentlemen then in the cat community. Cats with daggerboards get the leg up on windward performance and can get closer to the wind than their mini-keeled cousins; however, daggerboards still won’t get you pointed as close as a monohull. Cat people tend to choose speed over pointing and take wider angles at higher speeds to get where they are going. And yes, we may be known to crank up the iron genny if it’s been a long day of beating and the crew is threatening mutiny if we don’t arrive soon. 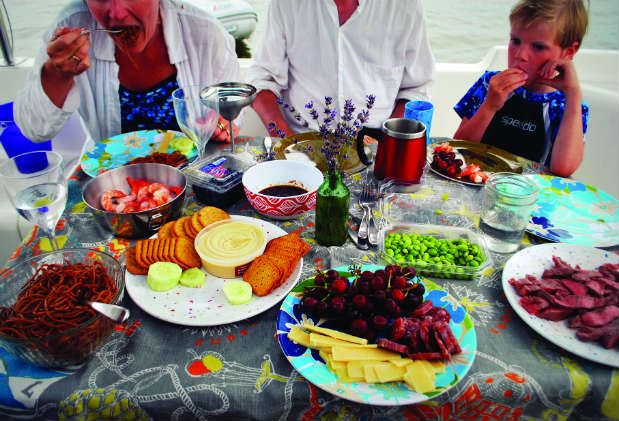 What about Stability?
The catamaran versus monohull debate will go round and round for generations. I bet the Polynesians would have argued with the British about the same things. Cat people cross oceans with speed and comfort, and monohull folks say, “But you’ll capsize and be upside down forever!” And monohull people look at cats and say, “But that lead weight will drag you to the bottom in minutes while we float happily forever!”

Sailing cats in all conditions is extremely stable. They don’t experience knockdowns, and the decks are wide and flat. Their inherent buoyancy combined with wide beams make them very secure sailing platforms. Can a heavy ocean going cruising cat capsize? Sure, but it would take an incredible amount of neglect and lack of seamanship, and (frankly) effort to make that happen. Imagine full main and genoa up, tightly sheeted, in 50 knots. If you’re sailing like that on any boat, maybe you need to go back to sailing school.

Sailing is a thrill regardless of what vessel you’re heading out on. Don’t let the jump from cruising or racing monohull to catamaran intimidate you. Find a friendly catamaran owner, and they will be happy to take you out and try for yourself. But be warned of one very real risk. Once you sail a catamaran, you may never want to go back to sailing a wall walker again. ~by Cindy Wallach

This is the first of a four-part series.