Sailing with Dad Brought Us Closer Together 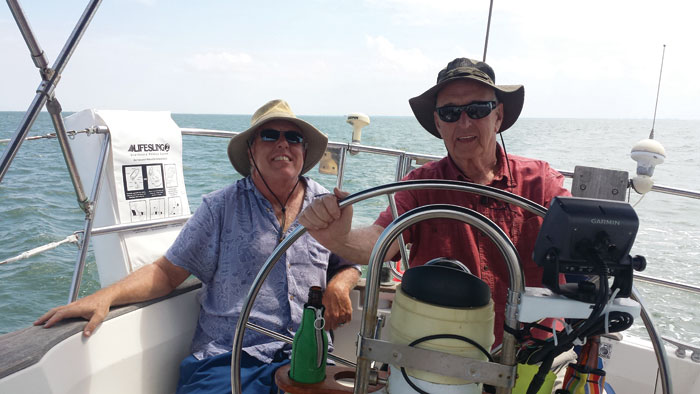 After first starting sailing in my mid-20s on my friend Scott’s MacGregor 22 in Long Island, I did not sail for many years until I moved to Tidewater, VA. I met a new friend, also named Scott. He owned a Catalina 26 called Loose Shoes. We never did any racing; it was lazy sailing unless there was another boat going in the same direction. I sailed on Scott’s boat for about four years, but then he had to go buy a bigger boat, a 50-foot schooner named Shanty. That kind of finished our day sailing.

I decided to step up and buy my own boat. After searching awhile, I found a boat that had been on the hard for a long time. A 1979 C&C Encounter. I named her Karpata. It took quite a bit of work, but after a month I had the boat kind of, sort of ready. I learned to sail her that summer with lots of misadventures. 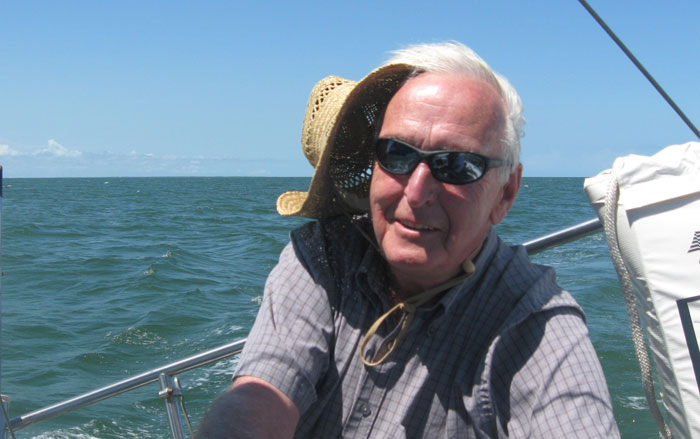 My father came down in September to sail. I thought he might be good for a day or two. There was a big learning curve for both of us, as I was still so new to the boat, and Dad had no experience with sailing or boating at all. We went out the first day, and it was a comedy of errors. I spent the day explaining how to fill the sails and go in a certain direction.

At the time I kept the boat out in Poquoson, VA. It is kind of a long way out before you hit the Bay. At that time I had the older GPS that just had the latitude and longitude. We had a great first day, but the boat was put into irons about six times and stuck on the bottom three times. I remember saying the depth finder was not working because it indicated zero depth; that was one of the times we got stuck. The second day went better; we still had groundings and irons, but still smoother.

Dad liked to talk while he was at the wheel. He would tell very interesting stories from his childhood on a farm: good stories, funny stories, and almost never a sad story. The bad thing about his stories is that I would be listening and laughing and not paying attention to where he was going until we hit bottom. Day three I took him to a horse race track, and he let me know that was nice but he would rather sail. By the end of the week we had a great time and we did not go into irons or hit bottom.

After dad returned to Connecticut, he called to ask if he could come back in the spring. He was hooked. I took a week off in June so that we could sail for the whole week. Day one we went to get fuel, and lots of wind crashed the boat bent the heck out of the bow spreader. That was my fault. We spent the next day heating, bending, and fixing.

We decided to go on a trip. The first day we went to Deltaville in great wind and made great time. That night, we enjoyed cooking on the Coleman stove and Hibachi grill. The next day we decided to go to Tangier Island, but when we turned to head toward the island, the wind was on our nose. We tried tacking, but after an hour we made a change of plans and were off to Cape Charles. Dad kept telling stories on the way over, and I kept saying “turn left or right.” We always had a good relationship, but the sailing brought us closer together.

When we arrived in Cape Charles, it was late. This was before they had installed the nice city dock, so we had to do some climbing. The old man did pretty well climbing. We had a nice dinner in town. We sailed back to Poquoson the next day. I gave Dad the setting on the compass, and he brought us right over. He was catching on.

I repowered the boat that winter. Every time we talked, Dad would bring up how much he loved sailing. We also kidded a lot. I told him that there were no barnacles under the keel, and this was because of him hitting bottom all of the time. That year dad asked if he could come down two times. Of course, I said yes. 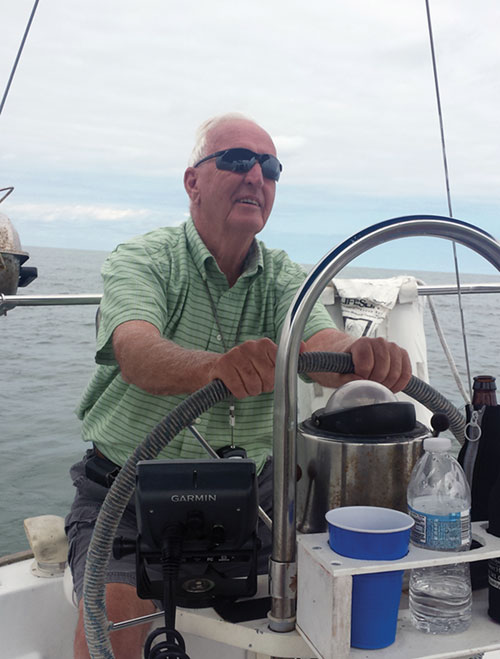 The next few years Dad came down, and because of my spoiled dog who did not like boarding, we just did day trips. Dad became a wheel hog. The only time he gave up the wheel was to eat. The only other time he gave up the wheel was when we saw dolphins. Dad seemed to leave his maturity at home twice: jumping up and down on the floating dock to mess with me and popping a beer open for the drive home. He grounded me for doing that when I was 18.

On a nice day, especially during the spring or fall, I would call Dad and let him know that I was out sailing. This would usually lead to a response about me being a rotten kid.

After dad turned 79 or 80, his balance was not as good. I had to worry about him going up to the bow, throwing lines, and helping tie up. Luckily for me, I had a lot of good friends who would go sailing with us on the rough days. He liked the company and really did not want to give up the wheel but would eventually.

I did get the chance to do one more overnight trip with him. We went over to Cape Charles with the new docks. He really liked it and said it was almost like stepping off onto an island. I let him roll with that. The next night we stayed in Mobjack Bay in the North River. We returned the next day, and he told me no more overnights.

That fall I met Sally, someone who loved to sail us much as I did. We dated through the winter, and by the time my dad came down, we were a couple. I had to work on the day Dad came, so Sally picked him up at the airport. By the time I got off work they had visited a brewery and had become best buddies. She was calling him Dad.

Sailing that year was special. Sally spoiled my dad, and they kept trying to ring the idiot bell. Dad came down twice that year and the year after that, always having a great time telling us stories even though a lot of them were repeats.

In 2016 dad came down two times, but the second time was for our wedding. He had triple duty that day: the driver of the bride, the father of the bride, and the best man. Mom was maid of honor. Instead of a honeymoon, we decided to buy a larger boat. We purchased a fixer-upper, 1996 32-foot  Sabre, also named Karpata.

Dad came down in August, and we were very lucky with the weather. He loved the new boat, which was easier to handle, and the god forsaken iron sail did not make too much noise. He was a much worse wheel hog with this because it did not tire him out. We did notice that he was moving slower and his balance was more off, but his appetite was not as big and he did not drink more than one or two beers.

We got a call from him right around Christmas to tell us he had lung cancer. He told us not to give up his seat, as he planned on coming down this spring. It’s been up and down with the prognosis, but we are making plans for him to come down, be a wheel hog, eat us out of house and home, and tell us some more stories.