Shorthanded Heavy-Air Spinnaker Strategies: Flying and dousing a chute in heavy air does not have to be scary. Here’s a story and some strategies to try yourself:

The singlehanders sailing in the July 8 Chesapeake Shorthanded Sailing Society (CHESSS) Challenge rendezvoused at Hackett Point Can 1 off Annapolis under a cloudless sky, with the five to 10 knot southwest breezes that were predicted by NOAA and the weather apps. The first leg of the cruise to Grays Inn Creek was a long deep reach. John Zseleczky, on his Pearson 30 Old Blue and I on my Farr 38 Synergy chose to set spinnakers. 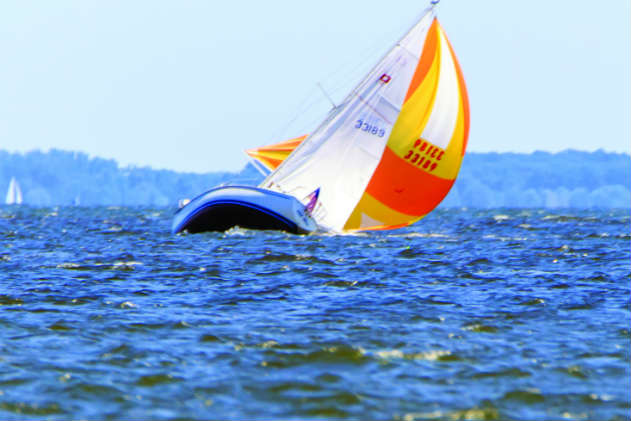 As the fleet moved northward toward the Chesapeake Bay Bridge and Love Point, under seemingly ideal conditions, the wind began to build and veer to the west, eventually reaching into the mid to high teens. Soon, the speed of the boats brought the apparent wind to a beam reach with the stronger gusts approaching a very sporty 20 knots over the deck.

We all watched in terror as Old Blue took some rather dramatic looking knockdowns, after which John skillfully doused his chute and continued under main and genoa. Synergy continued carrying her chute to Love Point, dousing at the turn into the Chester. Even without spinnakers, the breezy conditions made for fast passage times for all involved. 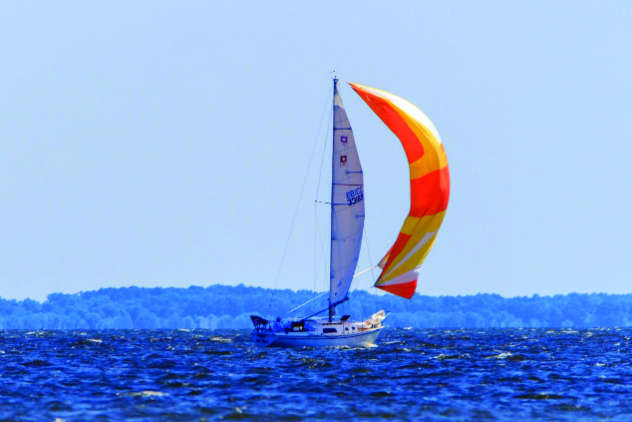 The CHESSS Challenges are meant to be non-racing venues for shorthanded sailors to build skills and build confidence. Typically, the CHESSS fleet rafts up, and there is a debriefing about what went right and what was learned that day. Given Old Blue’s adventures, the focus became useful lessons in safely flying a spinnaker solo in the gusty conditions experienced.

In the debriefing, John described how it felt to be on Old Blue during the knock down. Those of us who were not onboard had used terms such as “scary,” and “terrifying” to describe how the knockdown appeared. But John described it differently. From onboard, John knew his boat and could tell that the boat was not really in trouble of sinking or breaking something big. He knew that his rudder was not effectively in the water, and that he could not turn the boat while heeled that far. But more significantly he was aware that the gusts were short bursts. Because of that, he decided that the best strategy was not to release anything, but to wait out the duration of the gust, maybe 10-20 seconds and then when the boat began to stand up, to turn sharply downwind and douse the chute. 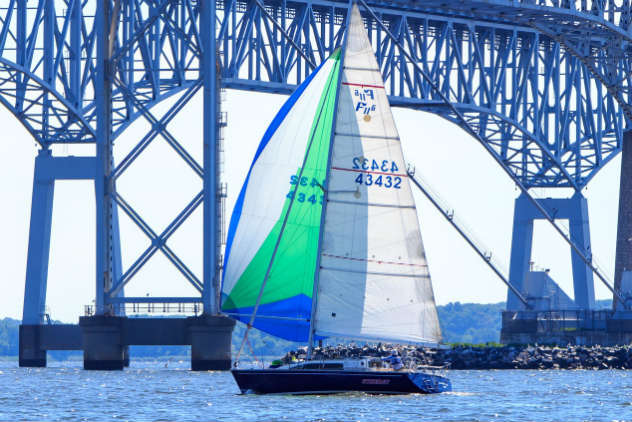 The discussion turned to dousing a chute in heavy air. Unlike a fully crewed racing drop, which can be done with the wind anywhere from abeam to dead aft, solo in a breeze, the boat needed to be turned almost dead downwind. Because both boats were using symmetrical spinnakers without a sock, the tack of the chute needed to be allowed to fly free. The skipper then gathered the foot of the sail together from aft of the boom forcing the upper part of the sail into the lee behind the mainsail. This required the ability to control the halyard and drop speed, but it allows the sail to remain collapsed and out of the wind, which is easier to manage and safely bring aboard.

Strategies for carrying the chute in gusty conditions were identified. To begin with, it was suggested that any sailor should experiment with how far their boat can heel before the rudder begins to lose grip and the boat rounds up. Once that is known, in heavier wind, keep an eye on the inclinometer or other visual clues to avoid getting to within five or so degrees of that heel angle.

To help control heel angle, the spinnaker is depowered by keeping the pole low and the luff stretched. This permits the sheet to be eased, thereby slightly opening the upper leech of the chute. The mainsail is vang-sheeted and bladed out.

In a gust, the traveler is lowered to leeward to quickly unload the main, and the boat turned sharply to leeward, deepening the angle to the wind and thereby partially blanketing the trailing edge of the chute and decreasing the apparent wind a little. Once each gust stops, the boats return to a course above the rhumbline so as to provide room to bear off in the next gust.

In the conditions of the day, the boats intentionally sailed a course that was high of the rhumbline in order to make sure that there was adequate sea room to leeward (between the boat and the shoals to the west of Kent Island near Love Point). The idea behind that strategy is that given that solo sailors sail close to a run to drop the chute, there needs to be searoom to leeward to be able to turn downwind if the conditions worsen. While crewed boats can drop a chute in three to four boat lengths, solo drops can take many times that distance even if things go perfectly, and things don’t always go perfectly.

To stay ‘clipped on’ it was suggested that an inflatable harness with two tethers be used while flying the chute. Both tethers should have releasable snap shackles at the chest rings so that you can quickly hook in with the ‘lazy tether’ and quickly release the prior ‘working tether’ if it becomes snagged during a maneuver where you need to move quickly.

If you are interested in participating in a future CHESSS Challenge, email Garner Bennett at [email protected]. In other news, CHESSS is also initiating Solo + One, with the goal to provide the newbie or inexperienced singlehander the chance to sail their boat with an experienced singlehander to develop an understanding of how to singlehand their boat and to reassure skippers that they can do so safely. To learn more about CHESSS and its programs visit chbaysss.org.