Depowering with the Mainsheet or Traveler?

I am a mainsail trimmer and my racing skipper and I are always arguing about de-powering. Which should I be using, the traveler or the mainsheet?

The simple answer, my children, is both. The traveler has two functions. It controls the boom’s angle to the wind, and it steers the boat, controlling helm and heeling in puffs and lulls. Set the twist with the mainsheet, and then use the traveler to position the boom on the centerline for maximum power and pointing as long as helm and heeling are under control. As the breeze builds and mainsheet tension increases, the traveler will gradually be dropped to keep the boom on the centerline. 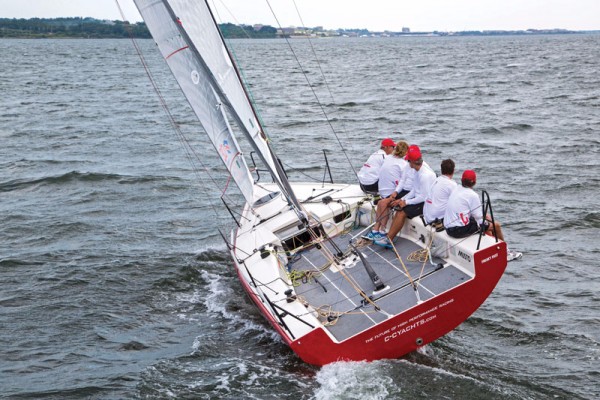 In medium conditions, the role of the traveler will expand to include control of the helm. As the boat heels too far and generates weather helm, drop the traveler to de-power theboat. The position of the boom relative to the centerline will become irrelevant. In medium air, play the traveler aggressively to maintain the correct amount of helm. Dump the traveler down quickly at the onset of a puff, but be ready to pull it right back up as the initial power of the puff is dissipated and turned into forward speed instead of heel. If you leave it down too long, you will miss the opportunity to point once accelerated. In medium air, the range will be wide, from the boom on centerline to all the way down.

Think of the traveler as the “fine tune” power control device. As long as the changes in velocity are not too rapid and too great, it will keep the boat on its feet (and stop the helmsperson’s whining). The beauty of using the traveler is that mainsail twist (controlled by the mainsheet), which is vital to both speed and pointing, does not change, only the total amount of power.

Once the velocity has increased to the point that the traveler alone will not keep the boat upright, it’s time to use the big stick and shift over to the mainsheet. Also, in very puffy conditions, where velocity and direction are changing rapidly, the sheet can be a better tool to control power. This is a technique called “vang sheeting,” because the vang takes over the job of pulling down on the boom and controlling twist, and the mainsheet moves the boom in orout to luff or fill the sail as necessary. Typically the traveler is pulled part way back up towards the centerline to keep the bottom of the mainsail working.

The mainsheet is the “gross trim” adjustment for the overall amount of power.

The type of boat and its performance characteristics also influence the choice. On fractional rigged boats with large mainsails, (particularly when the boat is on the lighter side) the mainsheet is played somewhat more aggressively. The traveler is usually kept closer to centerline. The bigger sail makes the boat speed particularly sensitive to small changes in mainsheet tension. The right amount of twist is key.

Of course, the sophisticated mainsail trimmer is continually making adjustments to both traveler and mainsheet, based not just on the overall amount of power, but also on issues such as boat speed, waves, and even tactical situation. For example, the uber trimmer may choose to ease the mainsheet slightly and drop the traveler to depower if the boat is sailing slower than targets, or about to hit a set of waves. Or if you are lifted or close to fetching the weather mark, it may pay to ease the mainsheet and lower the traveler more aggressively to turn a puff into speed instead of height.

To paraphrase rather badly from an ancient Zen saying, “as in all things, the correct answer certainly lies in the middle way.”

This article first appeared in 2015. Find more such articles here.