Last month we looked at perfecting the tack. For our next act, we need to master the gybe. We will look at gybing with symmetrical (I know there are still some of you out there) and asymmetrical spinnakers. Fortunately, most of the principles are the same. 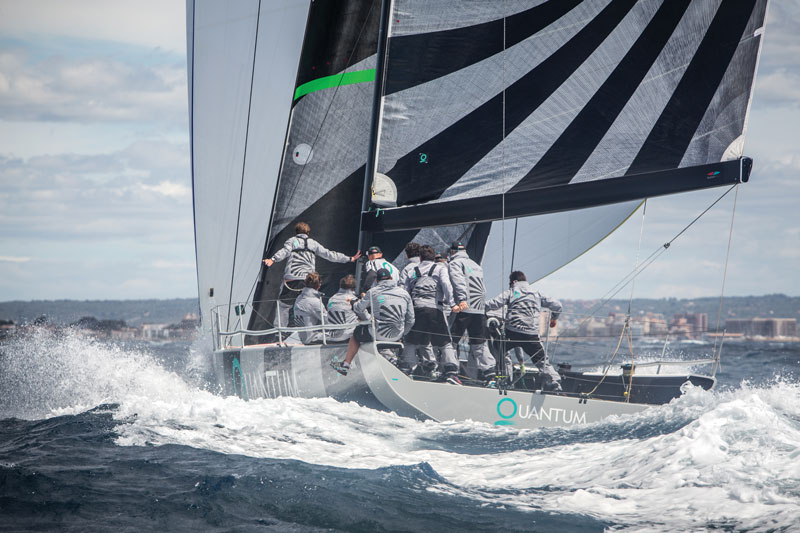 As with tacks, there are two key elements: steering and trim. As usual, the pressure is on the helmsperson. There is often much animated discussion and focus concerning the efforts at the front of the boat, but if a gybe goes bad, the fault usually lies further aft. So take heart, bow men and women. Good steering can save a gybe with bad mechanics, but no amount of mechanical perfection can save a gybe from a poor turn.

As with tacks, the first issue is timing and preparation. If the team is not ready, and the spinnaker is not full and flying well with the boat at the appropriate angle for the conditions going into the gybe, the odds are good that things will go wrong. The same 3, 2, 1 countdown and “turning the boat” is a good habit to help with coordination. A smooth, consistent rate of turn is best. The real key is that the boat can be turned no faster than the spinnaker is rotated. More on this in a moment, but the visual cue for the helmsperson is the spinnaker. If the bow gets ahead of the spinnaker as it is eased out, it will collapse and blow back through the fore-triangle. With a symmetrical sail, just turn at a rate that keeps the sail flying. For asymmetrical, turn slowly as the sail is eased until the clew is past the headstay.

In light air, you can speed the turn up slightly once the clew has cleared the headstay and is being pulled onto the new side with an asymmetrical. In medium air, keep the turn slow and smooth; don’t hesitate in the middle. Symmetrical gybes may require a very slow rate of turn through dead downwind, while the pole is reconnected and pushed out to avoid heading up too fast and making it difficult to push out. Heavy air gybes with either spinnaker type require a committed turn. There can be no hesitation in the middle. You must turn aggressively (but smoothly) at a consistent rate from one gybe to the next. If the pole is not made on a symmetrical, or if the sheet is not fully trimmed and the sail is still luffing with an asymmetrical, no problem. You can sort that out later. Just don’t get caught dead downwind in a heavy air gybe.

As with a tack, finding the right angle to build speed out of a gybe is the trick. In light to moderate air, as long as the spinnaker is full, you can head up to an angle probably just a little bit higher than the angle you went into the gybe in. In heavy air, you will need to be careful and anticipate that as the sail fills on the new gybe, it will want to round you up (accentuating the turn you are already making). You may need to snap the helm back to keep the boat from rounding up. Reference the angle to the horizon and waves to judge if the boat is turning. The wheel or tiller will not tell you a thing. (Sound familiar?)

Another parallel to the tack: the key is not getting the new sheet in. It’s all about the ease and the release. The sail must be full and flying regardless of the type of spinnaker. For symmetricals, it is usually easiest to have a single trimmer take both sheets, easing one side while trimming the other as the boat turns. On a big boat this may take two people, but they need to work together as if they were one. A great drill is to put the pole on the deck and gybe eight or 10 times without the pole to practice keeping the spinnaker flying. (I told you the bow team really wasn’t all that important for this maneuver).

For asymmetricals, ease as the boat bears away, letting the clew float out away from the boat until it is at the headstay; then release completely, following the sheet to make sure it runs. On the new side, take the slack out as the old sheet is eased. Once the clew is past the headstay, pull like a mad man. The bow team can help pull the new sheet aft and down. As soon as the sail fills, it will need a big ease (three or four feet), since you will have had to over trim to fill the sail.

What about the mainsail? For symmetrical gybes, simply wait until the magic moment when the sail unloads as you pass dead downwind, grab all the sheet parts (on a smaller boat) and throw the sail across. On a big boat, this will take some fast hands pulling in the slack on a winch at the critical unloaded moment. What you would like to avoid is laboriously trimming in the mainsail as you are trying to bear away. This will steer that boat in the opposite direction you are trying to turn and make the helmsperson’s job much more difficult. No matter what, as soon as the mainsail is across, make sure it is eased all the way.

For asymmetrical gybes, the mainsail is treated the same way with one wrinkle. In light to moderate conditions, you can actually delay the boom crossing the boat, literally holding it on the wrong side until the spinnaker fills on the new side and then releasing. This is referred to as a “late main gybe.” It allows the spinnaker to fill quickly and easily because there is no blanketing effect of the mainsail. For a moment you will essentially be “wing and wing.” In heavy air don’t try this. Just get the mainsail across. You will not be able to dally in the bottom part of the turn getting the spinnaker to fill. Complete the turn, get both sails across, and sort it out later.

There is another type of asymmetrical gybe which has become the rage in small- to medium-sized high-performance boats, the “blow-through gybe.” This is an advanced technique and a little tricky. We’ll save it for a separate discussion.

In light air, hold the weight forward and to leeward, and move smoothly to the new side to create heel out of the gybe. The only ones who might have to move are the trimmers. Remember, movement kills speed, so keep it light and then freeze. In medium air, roll the boat a bit. Hike hard on the weather side to flatten the boat and help with the turn. As the mainsail comes across, hold for a second until the boat starts to heel, and then as a group, head up to the new weather side “squashing” the boat flat to help it accelerate. In heavy air, just get to the high side as the mainsail crosses the boat, and hike!

Once again, a lot of moving pieces and subtlety go into mastering as opposed to merely gybing. But there are boat lengths to be had with good technique that are a lot more reliably produced than hooking onto the inside of a perfect 15-degree header—which is nice.