The Gust Front - Understanding Downdrafts in Thunderstorms While Boating

Info for Boaters About Downdrafts in Thunderstorms 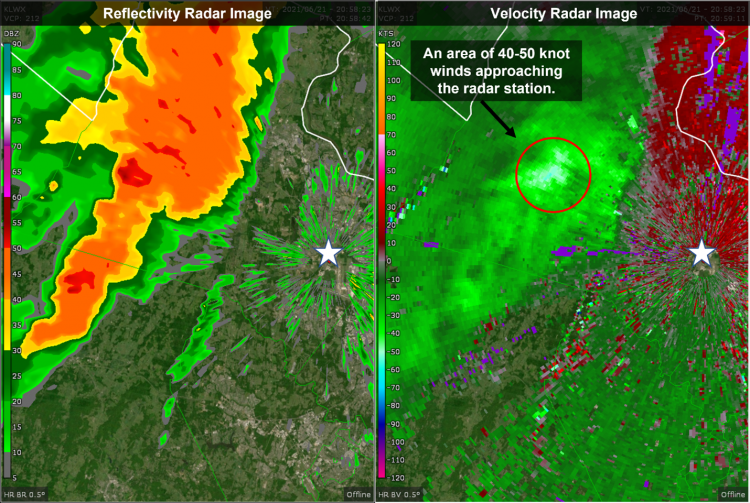 Updrafts provide the storm with its energy – air that is relatively warmer and moister than its surroundings. Rising air within an updraft steadily cools, and eventually the water vapor condenses into small cloud droplets. Over time, these cloud droplets merge into raindrops (it takes a million cloud droplets to make a raindrop). If the updraft rises high enough, many of the raindrops freeze into ice crystals and hailstones. As the storm matures, some of these raindrops and hailstones are ejected from the updraft and fall toward the ground.

Weather technology can help assess an approaching storm for risk of a downdraft. Some weather radar apps allow recent observations (Local Storm Reports, or LSRs) of strong winds, tornadoes, or large hail to be overlaid on the latest radar image. LSR’s aren’t perfect, and they can’t predict the rapid strengthening of a downdraft, but they do provide valuable insight on a storm’s recent behavior.

Another less well-known weather radar product – velocity imagery – can provide clues about an approaching storm’s wind field. Using the Doppler Effect, velocity imagery shows the motion of rain and hailstones relative to the radar station. The right panel on the radar image below suggests a 40 to 50 knot downburst is moving east toward the station (represented by the white star). Learn about interpreting velocity radar imagery here.

~By Mark Thornton of LakeErieWX

Learn much more about forecasting thunderstorms at our three-part webinar in March.