SailGP USA Puts on Great Show for Fans in NYC

When I interviewed Team USA helmsman Rome Kirby at the conclusion of Sail GP’s debut in Sydney Harbor last February, he promised me “the boys and I are hoping to put on a good show for the fans in the States.” 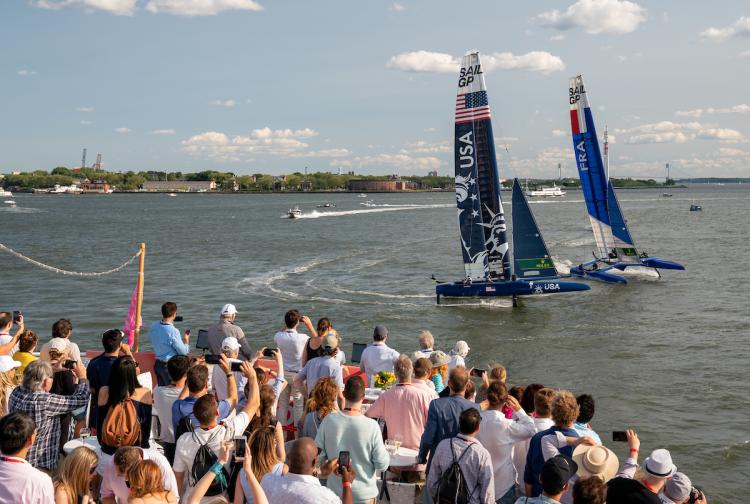 True to his word, Kirby led his Team USA to a first-place finish in the final fleet race of the recently completed Sail GP New York City event… which leaves the young American team only a few points away from third place in the series’ overall standings.

To call Team USA’s victory improbable is an understatement.

The team sailed Friday’s three matches without wing trimmer Riley Gibbs, who suffered a back injury prior to the start of the races. Filling in for Gibbs was Jeff Causey, team shore manager, who had never handled wing trimmer duties on the F-50 catamarans before. The results were less than spectacular, and at times the American boat was almost dead in the water while competing boats zoomed past at 30-35 knots. 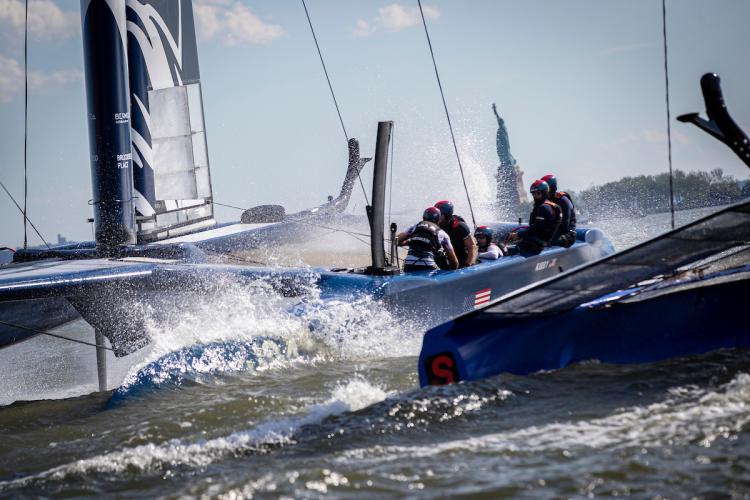 “It was frustrating for everyone,” says Kirby. “Jeff did a great job under difficult circumstances.”

This time, the Aussies won the first race on Friday; but were unable to keep up with the supercharged Japanese boat the rest of the afternoon.

Fortunes changed on the following day for the Americans.

While 30,000 fans lined the shoreline, Wing Trimmer Coach Tom Johnson checked in for the over-matched Causey… and helped the team finish a strong fourth in the first race of the day and first in the last race. Johnson had flown in from Europe just that day and rushed to the staging area with only a couple of hours to spare.

In the final race of the day, Outteridge’s Team Japan easily handled Team Australia in the match race finale.

The racing both days was challenging to say the least. Skyscrapers funneled the 13-16 knot breezes into hellish maelstroms which produced 30 knot winds one minute and calm conditions the next.

“It was crazy out there,” Slingsby said afterwards. “I’ve been sailing all my life and I’ve never been in conditions that changed as much as they did… much less sailing a boat that has got to keep foiling all the time to make any speed at all.

And speaking of speed, the Japanese boat attained speeds in excess of 48.7 knots (almost 60 MPH), setting a class record for speed attained during competition.

According to New Zealand’s Sir Russell Coutts, who together with Larry Ellison are the brains and the money behind the new series, “The idea behind Sail GP is to put together some exciting racing in iconic racing venues… to bring the thrill of sailing at unheard of speeds to a whole new crop of sailing enthusiasts. You don’t have to know anything about sailing to appreciate the beauty of these boats and the athleticism of the crews.”

Coutts tells SpinSheet it takes about $10 million to build, crew, maintain, and transport each of the Sail GP boats.

“There aren’t any spare boats,” says Counts. “But the boys really push the limits to get the advantage over one another. These speeds are incredible. And the crowds have been very enthusiastic.”