Although she'd sailed occasionally, after a 10-year break, when Eunice Lin found an old copy of our Start Sailing Now guide she started sailing again in full force! 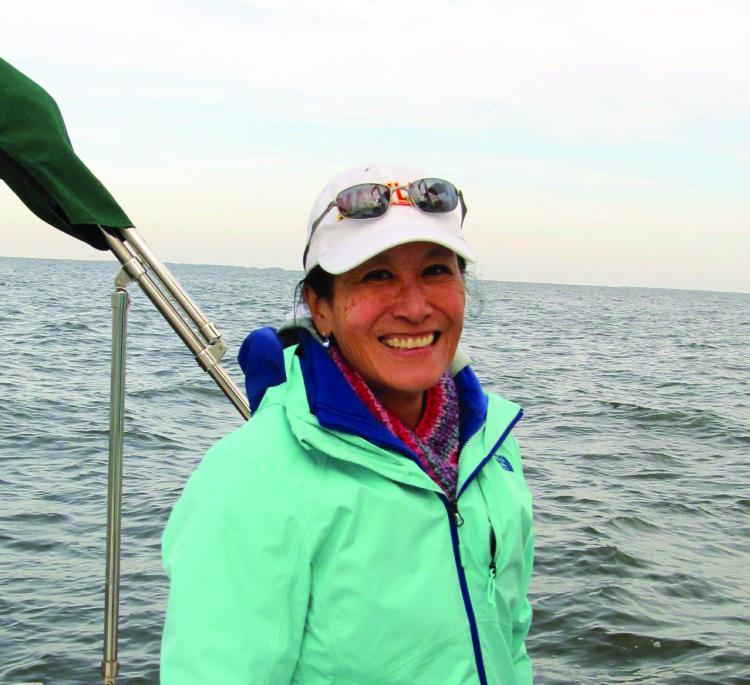 Tell us about how you got into sailing

In the late 1980s I sailed occasionally, mainly going with my friends on weekend charters once or twice a summer. I raced one season on a 22-foot S2 in 1992, then didn’t set foot on a boat for over 10 years. During the summer of 2011, I was knee deep working on the sale of our company. I found an old copy of “Start Sailing Now” and saw an ad for J/World. After talking to Jeff Jordan (who doesn’t realize what an impact he made on my life), I decided to take a weekend boat handling course as my summer vacation. The coach and I went out on a J/80 in fairly heavy winds and flew a spinnaker. It was nuts, but I was hooked. I had just turned 51 years of age. I signed up with J/World for the Labor Day regatta. A couple of months later my job was eliminated, and I was able to retire. Sailing and sailboat racing became my new “job.”

Excelling in a male dominated scene

Having been a lawyer for 25 plus years, I was accustomed to dealing with a male dominated world. Truth be told, sometimes racing around here really isn’t that different. However, I was okay being one of a small number of female boat owners/skippers, and I belong to a great sailing club, Herrington Harbour Sailing Association (HHSA), that has been incredibly supportive. But there are moments. I was okay with the mansplaining and with assumptions that I was crew, not an owner/driver. What I wasn’t okay with was when I went to register for a regatta and the woman at the table asked, “Has your skipper picked up your registration bag yet?” 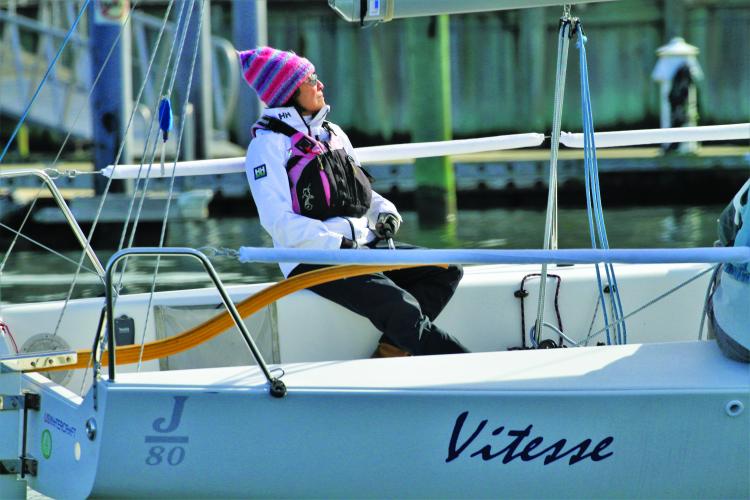 Covering a lot of territory in a short time

I have fit in a lot of sailing and racing in a fairly short time (I even qualified for the 2016 SpinSheet Century Club). I did a few regattas with J/World. I also raced regularly on the J/80 Vitesse, a 38-foot Pearson Endeavor, the J/105 Helios for a few years, and I make guest appearances on Delirium, a J/33. In 2014 I bought a 28-foot Alerion, Liberty Prevails, which I race in Herring Bay. I decided on the Alerion because I can easily singlehand her. Last year I bought a half interest in Vitesse, which I usually race with an all-female crew.

Since 2014, I’ve skippered several boats in the annual HHSA Women’s Regatta, including my Alerion. Because she maxes out at three to four crew, I now drive my boyfriend’s J/33 Delirium, which likes a big crew. I combine my Vitesse/Liberty Prevails crew with David’s female crew, and we have a blast. We’ve had our share of challenges, but a big part of the all-female regatta is rising to those challenges on our own, dealing with the issue and moving forward.

Last year I got my US Sailing Keelboat Instructor certification and became a part-time coach at J/World. Although most of my sailing is on the Bay, I also have sailed in the BVIs and the San Juan Islands, which are totally different areas and types of sailing.

If someone were interested in learning to sail, what would you tell them?

I’d tell them it’s never too late to learn! I’d also tell them to first find someone who can take them out on a nice day, to see if they like being on the water and being on a sailboat with all the strings and metal things. Then take several lessons. Find a school that will provide a nationally recognized certification. After that, take advantage of every opportunity to learn more about sailing and about boats in general. Offer to help someone with boat maintenance. Ask to get driving experience. Learn how to use the GPS and read a chart. Every experience will help increase one’s comfort level and confidence.

Did you encounter any obstacles or barriers when you began sailing?

I have been fortunate to have raced with great skippers and crew who were really supportive, especially when I decided to buy my own boat. The main challenge has been physical. I discovered that I didn’t have the upper body strength needed to do well in certain positions and in some conditions. Now I work with a personal trainer to really focus on upper back strength and endurance. Alas, now that I hang out in the back of the boat and drive, I’ve become quite a bit more lax.

~as told to Beth Crabtree