From Guest to Boat Owner and Cruiser

Originally from Great Britain, Terry lives and works in Chesapeake, VA. Terry began sailing in his mid-40s as a guest on others' boats. Today he and his wife Nikki are boat owners who sail the Southern Chesapeake and beyond.

Tell us about how you got into sailing: My main reason for starting to sail was to get away from work. I was running my web development business by myself, and I had been pretty much either working or on call 24/7 for 10 years. I needed a hobby that would allow me to get away and relax on weekends. About 11 years ago my wife’s brother, who had been sailing for decades, took me out sailing with him. I enjoyed it so much that I took a course at Naval Station Norfolk and bought my first boat, a 1981 Hunter 27, a couple of months later. 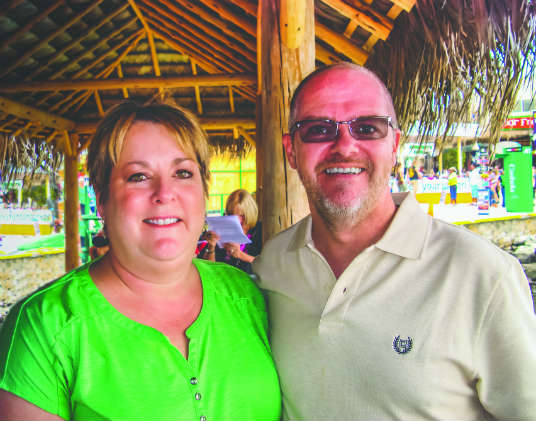 Getting started: I did a lot of research from books, websites, and YouTube videos when I decided to start sailing, but these sources really only covered the basics. The course I took at the naval base taught me a lot more about how to feel the different points of sail and how to control the boat.

My wife regarded the boat as my hobby, so she didn’t take the course with me. When we sailed together, she was along for a “relaxing ride,” though several times it was anything but relaxing, especially when the wind, current, and waves conspired. We regularly ended up soft aground or being blown or pushed into pylons.

We were lucky, however, that we had chosen the Hunter because it was a very sturdy, well-made boat, and we had purchased it at a rather low price. I was also lucky that my brother-in-law was around to give advice and help when something wasn’t working right.

Taking the next steps: Even though we faced challenges (which I now know are normal), we would go out every available weekend in the summer. Although the boat had no air conditioning or hot water, and only an icebox, we sailed our Hunter in North Carolina from the Neuse River to the Albemarle Sound and Roanoke for about two years. We then moved the boat up to Southall Landings Marina in Hampton, VA. From there we explored the Southern Bay, going as far north as Deltaville and Tangier.

In 2010 we bought our current boat, Forever Young, a 2000 Beneteau 331. It is faster and has many more conveniences than the Hunter. In this boat we have sailed farther north and have done several multi-day trips around the Southern Bay, cruising to Cape Charles, Onancock, and Crisfield on the Eastern Shore and Solomons, Reedville, St. Mary’s, the Rappahannock, and elsewhere on the western side of the Bay.

Nikki has become an ideal first mate. She is a great help around the boat and is invaluable for docking. Whether we are cruising alone or in a group, we enjoy sailing a great deal. We try to discover a couple of new locations to dock or anchor each season. We love the Chesapeake Bay because there’s so much to explore.

Did you have any preconceived notions about sailing? My biggest preconceived notion, which proved untrue, was that sailing only involved the wind. I hadn’t considered the impact of current and waves. I also did not know the amount of ongoing work involved in owning a sailboat and the particular issues that boats have purely because they are in a wet environment. I hadn’t really given much thought to things like zincs, thru-hulls, and stuffing boxes, and I got a quick education involving old, dirty diesel fuel.

If someone were interested in learning to sail, what would you tell them? I would suggest taking it slowly. Go out on other people’s boats and experience firsthand the elements and expenses that are involved in sailing. That hopefully will lead to a better initial understanding of all that is involved and also prevent someone from buying a boat and then losing interest.