Tell us about how you got into sailing.
I was 52, and my kids were finally gone. So I could indulge myself by learning something I had long dreamed of doing. In the summer of 2006 I took a weekend class at Annapolis Sailing School. I also went online looking for sailing clubs and found Singles on Sailboats, where I didn’t need a boat to sail. Many of their members need crew, are a great resource, and happy to teach. You just need to want to learn and ask questions. 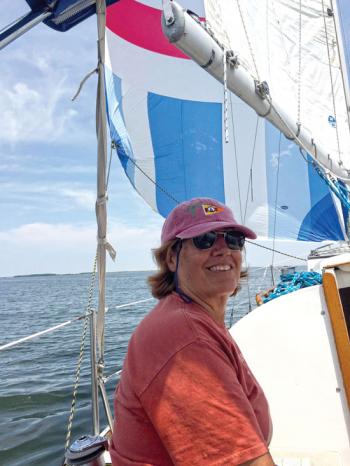 Did you have any preconceived notions about sailing that proved true or untrue?
I thought sailing had to be extremely active (which it can be). Prior to sailing I had tended toward very active vacations, such as hiking and biking. It took me a while, as crew, to learn to just be, and to only tend lines when told.

Particularly since I got my own boat, I have found sailing is great relaxation, while also being exhilarating. It requires a different form of thinking and alertness than I used when I was working and also than I use now, since I recently retired.

What has been your sailing experience thus far, and what are your future plans?
My first few years I crewed on Other People’s Boats (OPB) and was able to experience everything from cruising boats, which needed some physical strength, to “push-button” boats, which needed less. Since I bought my own boat, I have learned to single-hand and have been on several trips on the Bay. I have been on charter boats in Croatia and Italy, sailed with a friend on Long Island Sound (LIS), and crewed from the Bay to Milford, CT. I am considering taking my boat to LIS, and definitely will do more Bay exploration next summer.

If someone were interested in learning to sail, what would you tell them?
Take one of the weekend (or longer) courses at J/World, Annapolis Sailing School, or a similar school; then try to find a club to join where you can crew.

Do you own a boat?
Yes, a Bristol 29.9 named Estar, which is Spanish for “to be,” but the verb form for things that change. I keep her on the Rhode River.

Did you encounter any obstacles or barriers when you began sailing?
Not when I began sailing. For the first few years I had my own boat, as I was learning to skipper (in addition to honing sailing skills), I found that the dockhands at marinas and fuel docks would address the male crew as we would come in, assuming he was the skipper. I have since learned to immediately address the dock hands to let them know I am the skipper. Sometimes if there are only women onboard, comments have been overheard expressing surprise, although, I don’t hear that much anymore, and particularly not with the younger dockhands.

Know someone who should be interviewed by SpinSheet for our Start Sailing Now feature? Email [email protected]