Tell us about how you got into sailing?
I went to St. Mary’s College with the intention of rowing crew, but the practices were really early in the morning. Then I heard St Mary’s Offshore Sailing team was having open tryouts, and the practices would be later in the day. I thought that would be a good way to get out on the water. Although I’d been rowing in Baltimore City and had grown up fishing and crabbing on powerboats, I’d never been on a sailboat. I thought to myself, ‘I have a good head on my shoulders, a reasonably intact liver, and I’m a pretty good listener’, so I figured I could learn to sail. I joined the team, and we practiced for two hours every afternoon. I started as a secondary trimmer and moved up to trimming the main and eventually to calling tactics. 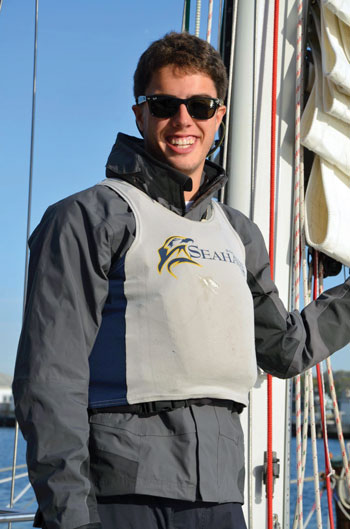 What has been your sailing experience thus far?
I earned my U.S. Sailing keelboat instructor certification after only sailing for seven months and was fortunate enough to get a summer job coaching on J/22s at the Downtown Sailing Center (DSC), Baltimore’s community sailing center located on the Inner Harbor. It gave me an opportunity to work with some excellent staff who don’t get nearly enough credit for the life-enriching programs and outreach they provide the surrounding communities. Giving me an opportunity to give back to the community, the DSC helped me become a better-rounded individual through their commitment to providing an inclusive and accessible environment, especially for youth, persons with disabilities, and those with limited opportunity.

During the summer of 2013, I accepted a position to help coach for a couple of months at the U.S. Naval Academy. There, I worked with approximately eight other civilians teaching Ensigns how to sail again. All of them were wicked smart and had been accepted to flight school that fall, but hadn’t sailed since they were Plebes. We spent a few week teaching them to again sail Colgate 26s, followed by a couple of weeks of acting as students ourselves, playing the part of Plebes and having them teach us to sail.

After college graduation I returned to Baltimore and worked for a couple of months as the fleet and facilities manager at the DSC. During that time I reflected on those previous summers of racing on a Farr 40 with St. Mary’s and a J/105 at DSC, the latter of which I continue to enjoy today. Through sailing I’ve had the opportunity to meet a lot of good people. In fact, it was while sailing at the DSC that I met the individual who offered me my current job, providing logistical support for ships and submarines that lay and maintain oceanic fiber optic cable.

If someone were interested in learning to sail, what would you tell them?
If you live in Baltimore, the easiest way to start sailing is to join the Baltimore Social Sailing League, run out of the DSC. For six to eight weeks you can sail with an instructor and a few other people on a J/22 for approximately $150, a really reasonable price.

Many sailing centers and community sailing programs have open houses where you can try sailing for free or at a low cost. Go, and see if you like it or not. It’s like renting ski equipment for a first experience. You don’t need to purchase all the equipment to try the sport out, but you may need to have some initial investment. Taking a course at a sailing school is also a great way to gain some skills.