Henry and Lynn Cohen met in their mid-40s, and neither realized that the other one had been boat-struck since elementary school. The couple spent three years reading and dreaming about sailboats before they bought their first one, a Catalina 27. Now they own their dream vessel, a Lazy Jack 32 schooner. They are self-taught, but had plenty of help from more experienced sailing friends. "We are living the dream with so much more to look forward to at this stage of life," says Henry. 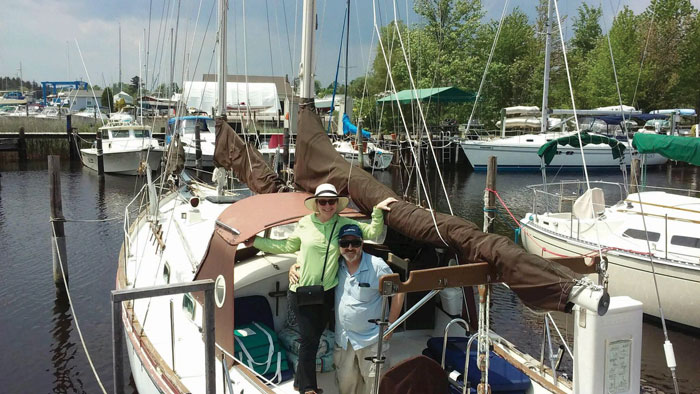 What sparked your interest in sailing?
“In 2005, we were invited to sail on a friend’s sailboat. When he turned off the motor and we were under sail, it was magic,” says Henry. “I had to have a boat of my own and do that.”

Lynn agrees, “We were hooked the first time out. We started dreaming of sailing our own boat and reading everything we could get our hands on about sailing while we waited for the right boat at the right price to come along. In 2008, when we were both in our early 50s, we bought an old, but lovable, Catalina 27.”

Getting underway
“At first we thought that sailing was a mysterious process that was going to be very hard to get the hang of,” says Henry. “However, we just took it bit by bit, and with the help of more experienced friends we were able to get out on the water. We had no formal classes, just lots of reading and learning by experience.”

Lynn recalls, “In the beginning we sailed our Catalina in the mouth of the Chester River. Later, when we finally mustered the courage to take the boat out into the Bay, we realized that the Bay itself was usually easier to handle than our Chester River ‘comfort zone,’ with its challenging and confused winds and currents.

“Even while we were still learning on our Catalina, we were already dreaming about sailing a schooner. One of the first sailing articles we read was written by the late Captain Don Launer, owner of the schooner Delphinus. Providentially, after Launer’s death, Delphinus was put up for sale at the very moment we were looking to replace our Catalina. Little did we know when reading that first article by Launer that we’d end up buying his schooner in 2016.  We now keep Delphinus at a private dock near Middle River. She is named for the dolphin constellation, and we nicknamed her the Flippership.”

Overcoming perceived obstacles
“We initially thought sailing was for rich people, but we found that we were able to make it work on a fairly tight budget. It depends on your priorities. We tightened our belts wherever possible to achieve our dream,” says Lynn.

Henry adds, “Our Catalina friends, Shawn and Eileen Bozarth, were invaluable in helping us learn all sorts of little things that make a sailboat go. When we first bought Delphinus, I didn’t think I was up to the challenge of maintaining and troubleshooting such a boat. I’m still not convinced some days, but I keep learning every time I’m onboard. Our fellow schooner owners and good friends Paul Schaub and Darlene Alexander, of the schooner Celebration, have also been tremendous allies in getting a handle on the schooner rig.”

What are your future sailing plans?
“We will continue to participate in the Great Chesapeake Bay Schooner Race (2018 will be our third year), and I intend to get a captain’s license,” says Henry. “We also want to take folks out on the water and show them the natural beauty of our Bay and the tranquility of moving across the water under the power of the wind. We envision day sails for birdwatching, photography, dolphin sightings, and family excursions.”

If someone were interested in learning to sail, what would you tell them?
“Read everything you can get your hands on. Learn as much as you can about boat models, and then find a boat that fulfills your needs,” says Lynn. “There are lots of ‘adoptable’ older sailboats out there that will get you started. We’d recommend something in the 27-foot range, like a Catalina 27. They were well-built, and there are tons of them out there for not a lot of money. Boats for day sailing are fine, if that’s what you’re looking for, but if you want to go out for a long weekend, you’ll need something large enough to be comfortable for overnight trips. If you can’t anchor out comfortably, you might lose interest.”