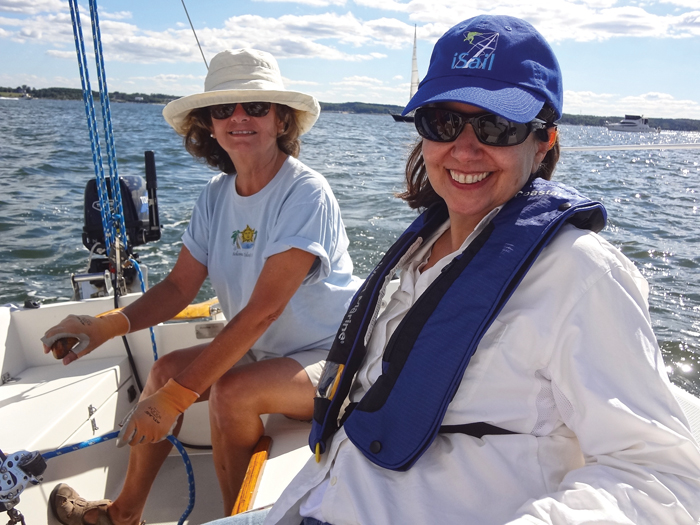 Unless you speak Old English, sailing terms probably sound confusing to you. You are not alone. Even longtime sailors use the not-soofficial terms of “thingamabob” and “doo-hickey.” In sailing, there is always something to earn. Don’t worry if it takes you time to digest the complex language of sailing; it is an ongoing process and a fun one. Learning these 22 terms will help you understand what’s going on aboard any sailboat in the English-speaking world.

Below: when you go into the cabin, it’s never “downstairs.” It’s always down below.

Boom: the pole hanging horizontally above the cockpit that could boom into your head if you’re not careful.

Bow: the front end of the boat, or as sailors refer to it with a grin, “the pointy end.”

Cleat: classic ones are shaped like anvils, but there are more modern versions with pinching teeth for securing lines on deck and on the dock.

Cockpit: the area with seats near the steering station or helm.

Come about: to turn the bow of the boat through the wind. The skipper will say, “Ready about!” The crew responds, “Ready,” and they keep their heads down to avoid the boom. The skipper says, “Helmsalee” or “Hard-alee” and turns.

Deck: anywhere you can walk around on the exterior of the boat.

Heel: the boat heels or leans at an angle while sailing. It does not keel over as one might after too much rum.

Helm: where the skipper steers with a wheel or a stick-like tiller.

Jib: the smaller triangular sail attached at the bow.

Keel: the heavy fixed fin on the bottom of the boat. (see heel)

Line: a rope on a boat is always called a line. (see sheets)

Mainsail: the big sail attached to the mast.

Mast: the vertical pole on deck or “the stick.”

PFD: a personal flotation device or lifejacket. If someone asks you to wear one, don’t be offended. Lifejackets are not as silly looking as they used to be.

Port: the left side of the boat facing forward. Port and left are both four-letter words.

Sheets: lines attached to the sails to control them. Crew members help with sheets.

Spinnaker: a parachute-like, triangular sail attached at the bow and used to propel a sailboat with the wind behind it. Sometimes called the kite or chute.

Starboard: the right side of the boat facing forward.

Stern: the back end of the boat, opposite the pointy end.

Winch: cylindrical metal hardware—beer- or paint-can sized—on either side of the cockpit where sheets are wrapped clockwise to crank sails in and out.